A much-anticipated offseason started off with unexpected front office turnover and ended up focusing squarely on the future.

Whatever the Braves’ plans may have been heading into the offseason, they were jolted with the sudden and stunning downfall of former GM John Coppolella and eventual move of president of baseball operations John Hart out of his role atop the baseball hierarchy.

The former regime was toppled by a scandal arising out of the organization’s international signing practices. In addition to the front-office upheaval, the violations of MLB rules cost the organization its rights to several notable previously signed prospects and left it facing reduced international spending capabilities for several seasons as well as the loss of a third-round pick in the upcoming draft.

After dabbling in a move for former executive Dayton Moore, who instead remained with the Royals, the Atlanta organization struck a deal to bring in former Blue Jays GM and recent Dodgers exec Alex Anthopoulos. He’s now the top baseball decisionmaker in the Braves hierarchy.

Whether that shake-up changed the Braves’ plans for the 2017-18 winter will never really be known. But the organization certainly did not end up acting as many anticipated. Having opened Sun Trust Park last season and with an abundance of young talent reaching the majors, many anticipated that the organization would announce the beginning of the end of its rebuilding period by pursuing some significant additions via trade and/or free agency.

As it turned out, the Braves’ arguable on-field needs — including potential improvements at third base, the corner outfield, and the bullpen, along with veteran rotation help — were never really addressed, at least not in the manner of an organization that’s readying for contention. While the division-rival Phillies made two significant splashes and spent some real cash on their bullpen, the Braves pursued a course designed to clear future payroll capacity and support the ongoing development of internal talent.

The biggest need identified by Anthopoulos was not, say, finding a high-quality regular at the hot corner. Rather, it was figuring a way to move Matt Kemp and his significant remaining contractual obligations in an advantageous manner. After moving the remaining dollars owed to reliever Jim Johnson, Anthopoulos arrived at a fascinating money-shifting swap involving Kemp with none other than the organization he had just worked for. In a deal full of notable veteran names, the Braves shipped Kemp to the Dodgers in exchange for high-priced veterans Brandon McCarthy, Scott Kazmir, and Adrian Gonzalez — along with $4.5MM to make the deal entirely cash-neutral. Atlanta also landed versatile bench candidate Charlie Culberson.

The roster-clearing benefits for the Atlanta organization were clear. Moving Kemp out of the picture left the club free to try some other options in left field. The Braves claimed Preston Tucker and later signed Ezequiel Carrera; those two left-handed hitters could pair with the righty swinging Lane Adams. Of course, the real occupant of left is not going to open the 2018 campaign in the majors. All-world prospect Ronald Acuna ran roughshod over the Grapefruit League but will not make his MLB debut until later in the coming season. While Anthopoulos has insisted the decision was based purely on Acuna’s development, and he did race through the minors last year, there’s also little doubt that service-time considerations also played a role. 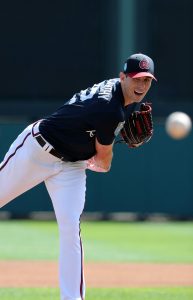 Of course, that could have been accomplished simply by cutting Kemp loose. Picking up the veteran trio was of greater utility, however, even with Gonzalez being cut loose. Kazmir and especially McCarthy will represent 2018 rotation candidates for the Braves, thus obviating the need to spend more on veteran pitching to build out the rotation. Having already declined an option over knuckler R.A. Dickey, the Braves needed some innings to avoid putting too much pressure on their young arms.

Additionally, the swap shifted the payroll hit from Kemp forward. The Dodgers preferred to consolidate the money they owed to free them from the luxury tax this year. For the Braves, though, the move allowed the team to spend down its obligations now while clearing the books for 2019. Now, only Freddie Freeman, Julio Teheran, and Ender Inciarte are promised money for the future.

It seems, though, that the financial shift also tamped down the likelihood of any significant outlays for the 2018 season, as the immediate payroll ballooned. That left the Braves seeking low-commitment additions throughout the winter. In addition to picking up Tucker and Carrera in the outfield, Anthopoulos added a variety of infielders, including Culberson, Danny Santana, Christian Colon, and Ryan Schimpf. Having already extended Kurt Suzuki to reunite with Tyler Flowers behind the dish, the club added Chris Stewart on a non-guaranteed MLB deal and Rob Brantly on a minors pact to round out the catching depth. After losing Luiz Gohara to injury, the club picked up Anibal Sanchez on a minors pact to deepen the rotation mix. And Anthopoulos added a variety of low-risk relievers, including Chase Whitley, Shane Carle, Josh Ravin, and Tommy John patient Grant Dayton. None of those players cost the Braves more than a de minimus amount of cash, 40-man spot, and/or a non-roster invitation.

The club’s approach hardly seems to set the stage for a 2018 postseason berth, though a run can never be ruled out. There is, after all, quite a lot of intriguing talent spread across the Braves’ MLB roster and top minor-league affiliates. But there are also loads of questions, the answers to which will help chart the future for the organization.

We already touched upon the outfield situation. Ender Inciarte is firmly ensconced in center, while Nick Markakis will presumably handle the bulk of the time in right during the final season of his contract. That leaves left field open to examination as the season progresses. Unless Acuna is injured or unexpectedly stumbles at Gwinnett, odds are the pressure will steadily mount for him to be handed the reins — particularly if the Braves get off to a decent start and/or the platoon players don’t pan out.

The right side of the infield is set with star first baseman Freddie Freeman and young second bagger Ozzie Albies, who has earned a long leash after a strong, 57-game debut showing last year. Likewise, the catching situation is largely settled to open the season, as the Flowers/Suzuki pairing will handle the duties.

There’s more potential intrigue, though, in the remaining two spots on the dirt. Dansby Swanson’s sophomore swoon tamped down excitement about his future, though there’s still good reason to believe he’ll be a quality regular and ample cause for the Braves to exercise patience. Third base is largely wide open. It seems the organization will give Johan Camargo a shot at proving he’s no flash in the pan, though he’s expected to open the year on the DL. Schimpf perhaps could have received a shot but turned in a rather unbelievable 0-for-30 performance this spring. Rio Ruiz has not exactly seized his limited opportunities to date but has perhaps shown enough at Triple-A to warrant a chance. Otherwise, the club would likely be left with a mix of Culberson and Santana to hold down the fort. Well-regarded prospect Austin Riley could force his way into the picture if he keeps mashing; no doubt the hope is he’ll earn the job in the long run. It’s perhaps still possible that the Braves could end up finding another option from outside the organization over the next few weeks.

The pitching staff, meanwhile, is chock full of wild cards. The top four members of the rotation are clear, but each comes with as much uncertainty as talent. Julio Teheran is looking to bounce back from a mediocre 2017 season, Mike Foltynewicz will try to turn the corner, McCarthy has made just 25 starts over the past two seasons, and power lefty Sean Newcomb needs to show that he can limit the free passes. A rotation slot had been intended for youngster Luiz Gohara, who impressed at all levels (including a five-start MLB debut) last year. But he suffered a few injuries in camp and now looks to be ticketed for a reasonably lengthy layoff, leaving the door open behind him. While Atlanta may not need a fifth starter to open the year, the club will eventually need to fill out the starting staff. Kazmir and Sanchez are the notable names here, with both looking to rebound from unproductive recent seasons. Otherwise, Matt Wisler, Aaron Blair, or Lucas Sims could again be given opportunities despite failing to capitalize on their prior chances.

No matter how that situation sorts itself out, the Braves will be weighing all season long whether and when to make some further promotions. Touted young hurlers such as Kolby Allard, Mike Soroka, Max Fried, and Kyle Wright are expected to knock on the door in the near term. With another wave of talent coming up behind them, the front office surely won’t hesitate to take a look at those arms against the game’s best hitters when they’re deemed ready. After all, it could soon be necessary to make some tough calls on which pitchers to keep and which to dangle in trades.

If Anthopoulos focused anywhere in particular this winter, it seems to have been the bullpen, where the club added new arms and outrighted Mauricio Cabrera and Luke Jackson. There are loads of options stacked up for trials and patches as the situation dictates. Arodys Vizcaino will be looking for some elusive consistency after a strong 2017 effort, with Jose Ramirez and lefty A.J. Minter primed to join him at the back of the pen. Veterans Peter Moylan and Sam Freeman figure to provide some stability. Dan Winkler, whose Rule 5 status is still not fully determined, will hope to remain healthy and effective.

That likely leaves two spots still open to some debate, with Whitley, Ravin, Carle, Wisler, and Blair perhaps the chief candidates to open the season on the active roster now that Rule 5er Anyelo Gomez has been returned. Lefty Rex Brothers has struggled this spring after agreeing to a non-guaranteed arb deal. Reclamation projects Jesse Biddle and Jacob Lindgren could represent interesting southpaw candidates at some point but aren’t immediate options (with the former already having been optioned and the latter dealing with elbow issues). Righties Jason Hursh and Akeel Morris won’t make the active roster but are still on the 40-man, as are young southpaws Adam McCreery and Ricardo Sanchez. Needless to say, it’s likely there’ll be quite a lot of turnover in the relief unit as the season goes on. With 26 pitchers on the 40-man roster at present, it’s all but certain that a few hurlers will end up being traded or placed on outright waivers at some point.

Outside of those roster spots that were locked down entering the winter, the strategy was obviously to build out depth, seek some diamonds in the rough, and create competition. That process is likely to carry on throughout the season as needs arise and players sink or swim. The Braves will surely prioritize protecting their future talent pool over maximizing immediate MLB performance, but plenty of difficult decisions will begin to be made as camp draws to a close. While the organization doesn’t really have loads of veterans that figure to profile as mid-season trade candidates, it’s certainly possible that deals will be considered at some point for Teheran, McCarthy, Markakis, and certain veteran relievers or bench pieces. Expectations are tempered for the coming season, but fans and the front office alike will surely be watching closely at how things are shaping up for 2019 and beyond.

How would you grade the organization’s offseason efforts? (Link for app users.)