The Braves announced Monday that they’ve selected the contract of top pitching prospect Touki Toussaint from Triple-A Gwinnett. He’ll serve as the 26th man in today’s doubleheader and is slated to start the first game of that twin bill. 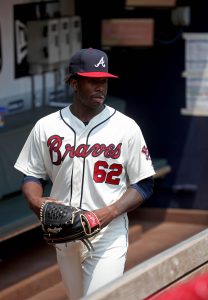 Toussaint, who turned 22 in late June, ranked as the game’s No. 76 prospect on the midseason update from Jim Callis and Jonathan Mayo of MLB.com, while Kiley McDaniel and Eric Longenhagen of Fangraphs currently peg him 56th overall.

Atlanta infamously acquired — or, more accurately, purchased — Toussaint from the D-backs barely a year after Arizona had selected him with the 16th overall pick in the 2014 draft. The Braves took on the remaining half season of Bronson Arroyo’s contract in order to extract the well-regarded Toussaint from the D-backs organization in a trade that saved Arizona roughly $10MM.

While it’s taken nearly three years (as was to be expected when purchasing a recent high school draftee), the Braves appear poised to reap the benefit from that Arizona misstep. Through 117 1/3 innings between Double-A and Triple-A in 2018, Toussaint has been excellent, working to a combined 2.68 ERA with 10.7 K/9 against 3.8 BB/9. He’s allowed only seven home runs in that time. Callis and Mayo praise both his fastball and curveball as plus offerings, adding that his changeup could be an average or better third pitch.

Toussaint will become the latest arm from the Braves’ vaunted collection of pitching prospects to surface at the MLB level over the past couple of seasons. While the results have been mixed to this point, the team has seen positive signs from that group — most notably from Sean Newcomb but also Mike Soroka (prior to his shoulder troubles) and Max Fried. Kolby Allard and Luiz Gohara, meanwhile, are still waiting for earnest looks in the rotation after brief exposure to big league opponents, while others such as Kyle Wright and Ian Anderson are still awaiting their first call to the big leagues.

It seems likely that Toussaint’s promotion will simply be a spot start, though the fact that he’s serving as the 26th man would mean that he’s eligible to return whenever the Braves next need a fifth starter. There’s no predicting yet exactly how Toussaint’s service clock will play out, as it remains to be seen when the Braves will bring him to the Majors on a permanent basis, but he’s currently controlled through at least the 2024 season. If he finishes the 2019 campaign with less than one full year of MLB service, that’d allow the Braves to control him through the 2025 season, although Atlanta likely hopes that Toussaint is capable of securing a long-term spot on the MLB roster in quicker fashion.