The Phillies announced that they have acquired lefty Luis Avilan from the White Sox. Righty Felix Paulino will go to Chicago in return.

On the other side, the White Sox also announced some corresponding moves. The club purchased the contract of righty Ryan Burr to take Avilan’s spot. Additionally, first baseman Jose Abreu was placed on the DL (as expected) and infielder Jose Rondon was recalled. 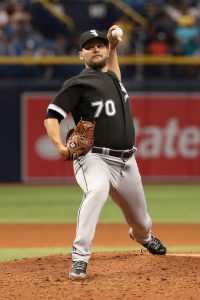 Avilan will be tasked with helping the Phillies retire tough lefty hitters down the stretch. His solid work this year earned him the #15 spot on MLBTR’s recently released list of the top 20 remaining August trade candidates.

Though his 3.86 ERA doesn’t jump off the page, earned-run numbers aren’t the most relevant statistic for him. The 29-year-old has thrown only 39 2/3 innings in 58 appearances, a reflection of his specialist usage. He has also been hurt by a .352 BABIP-against that seems in line for some regression.

As has long been the case, Avilan has been stingy against opposing lefty batters in 2018. Through 77 plate appearances this year, they’re hitting just .214/.276/.286 against him without a single home run. Hitters with the platoon advantage carry a .785 OPS against Avilan, though that’s a palatable enough number and he has been quite solid against righties (.678 OPS-against) in his career.

The Phillies will presumably take over the balance of Avilan’s manageable $2.45MM salary, though that has not yet been made clear. He’ll be eligible for arbitration one final time this coming offseason, so the Phils will have an opportunity to keep him around if they so choose.

In return, the South Siders will add a 23-year-old hurler who has reached the Double-A level this year. Paulino has split his time this year between High-A and Double-A and between the rotation and bullpen. All told, he carries a 3.91 ERA with 7.2 K/9 and 3.3 BB/9. Paulino will be eligible for the Rule 5 draft this winter if he is not added to the Chicago 40-man roster.