The Brewers and White Sox have announced to a trade that will send left-handed reliever Xavier Cedeno from Chicago to Milwaukee, as first reported by Ken Rosenthal of The Athletic (via Twitter). A pair of minor-leaguers — outfielder Bryan Connell and righty Johan Dominguez — will head to the White Sox in the swap. 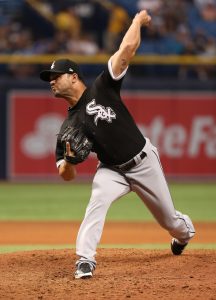 Cedeno, who celebrated his 32nd birthday earlier this week, signed a minor league deal with the ChiSox this offseason after being non-tendered by the Rays. He worked his way onto the big league roster and has had a solid season on the South Side, working to a 2.84 ERA with 28 strikeouts against 13 walks along with a 55.4% groundball rate in 25 1/3 innings.

Notably, Cedeno has allowed just one homer this season despite the hitter-friendly nature of Chicago’s Guaranteed Rate Field, thanks in part to a robust 55.4 percent ground-ball rate. Interestingly, too, he has not just been effective against opposing lefties — who are hitting just .209/.277/.326 against him — but also against righties, who have managed only a .200/.322/.300 line.

That’s a rather impressive showing for a pitcher who sat out almost all of the 2017 season due to arm issues. He had been rather effective in the prior two seasons as well, though he had also been utilized mostly in a specialist capacity (throwing only 87 1/3 total innings in 120 appearances).

Just how sustainable Cedeno’s 2018 output is can certainly be debated, particularly as regards right-handed hitters. But while he’s only averaging 86.6 mph on his heavily-used cutter, the offering has shown greater horizontal movement and has allowed him to generate a 13.0% swinging-strike rate. And Statcast figures support the idea that Cedeno has been legitimately hard to square up (.273 wOBA; .282 xwOBA).

If things go well the rest of the way, Milwaukee will have the added bonus of retaining Cedeno beyond the 2018 season. He entered the season with four-plus of big league service and will finish with just enough service time to reach five full years. That’ll leave him with one offseason of arbitration eligibility remaining. He’s playing out the year on a $1.05MM base salary, so his 2019 salary would be modest even after a potential arbitration raise.

In exchanging for parting with Cedeno, the White Sox come away with a pair of youngsters. Connell, 19, had an impressive showing in his third attempt at the Dominican Summer League but hasn’t hit as much since being promoted to the Rookie-level Pioneer League. The 22-year-old Dominguez, meanwhile, has been a teammate of Connell quite a bit over the past three seasons. His longest stint at a single spot this year, though, came at another Rookie level, the Arizona League. He threw 19 1/3 scoreless innings there, allowing only five hits while recording 21 strikeouts against seven walks.