12:29pm: Ausmus received a three-year contract, according to Maria Guardado of MLB.com.

“Over the past few weeks, our baseball operations personnel sat down with numerous highly-qualified and impressive candidates for our managerial role. We are thankful to all of them for their time and effort throughout the process,” Eppler stated. “Ultimately, Brad’s balance of connectivity, communication and leadership skills as well as his understanding of evolving strategies and probabilistic approach to decision making led us to him. We believe his knowledge, drive and growth-mindset will allow him to integrate seamlessly with our players and staff and will be pivotal in advancing our culture and moving us toward our goals as an organization.” 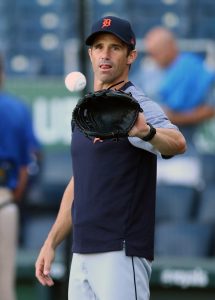 The 49-year-old Ausmus – a former major league catcher – is taking over for another ex-MLB backstop, Mike Scioscia. Now an Angels icon, Scioscia took the helm in 2000 and finally ended his reign when he stepped down less than a month ago.

In the wake of Scioscia’s exit, the Angels reportedly interviewed 10 managerial candidates; at one point in the process, it appeared the job would go to their Triple-A skipper, Eric Chavez. In the end, though, the Angels opted for someone with major league managerial experience in Ausmus, who oversaw Detroit’s dugout from 2014-17. The Tigers went 314-332 with one playoff berth and two seasons of at least 86 wins during that period.

In shifting from the Angels’ front office to their dugout, Ausmus will hope to turn around a disappointing situation in Anaheim. Even though the Angels have the game’s best player, center fielder Mike Trout, they’ve finished under .500 three years in a row and haven’t gone to the playoffs since 2014. The club hasn’t even won a postseason game since Trout’s remarkable career began in 2011. A rash of injuries helped undermine the Angels’ efforts in 2018, of course, though it still would’ve been a tall task for a healthy LA team to make the postseason in the AL West – a division which included two playoff teams (the Astros and the Athletics) and the 89-win Mariners.

At 80-82, the Angels ultimately finished 23 games behind the Astros and 17 back of the A’s, giving them plenty of ground to make up during the offseason. With Trout, Andrelton Simmons, Shohei Ohtani and Justin Upton leading their offense, it seems the Angels will mostly focus on improving their pitching staff over the winter. The starting staff is in desperate need of help, especially considering Ohtani underwent Tommy John surgery on Oct. 1 and probably won’t pitch next season.