7:10pm: The Orioles have announced that neither Duquette nor Showalter will be retained for the 2019 season. Director of player development Brian Graham will oversee baseball operations while the team conducts a search for an outside hire. He’s been with the team since 2007 and previously served as an interim GM for the Pirates as well.

“The club will hire an executive from outside of the organization to lead the Baseball Operations department,” the Orioles said in tonight’s press release. “Once in place, this individual will have the final determination on all baseball matters that he or she believes will make the Orioles successful on the field, entertaining to fans, and impactful in the community.”

5:06pm: The Orioles have indeed moved on from Duquette, tweets Fancred’s Jon Heyman. 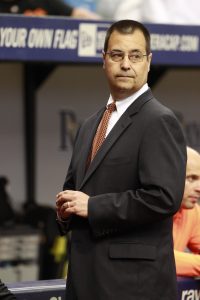 Like Showalter, Duquette’s contract expires at the end of the 2018 season. However, while reports in recent weeks had largely indicated that Showalter was likely to depart, the general sense was that the organization would hang onto Duquette. Instead, it now seems that the Orioles will be looking for both a new field manager and a new head of baseball operations this offseason.

Duquette, 60, has been with the O’s since the 2011 season and helped to orchestrate three postseason appearances, including an AL East division title in 2014. That said, Duquette’s fingerprints are also on the 2018 season’s MLB-worst 47-115 team — the fewest wins in franchise history. Not all of that disappointment can be placed on Duquette alone, as owner Peter Angelos has had his own detrimental impact on the organization at times. While Angelos gave the front office plenty of payroll capacity with which to work, he also reportedly had little interest in investing on the international amateur free agent market and was also said to be instrumental in bringing back Chris Davis on what is perhaps baseball’s worst contract at this point.

Duquette’s tenure with the O’s featured some notable successes — e.g. signing Nelson Cruz when his market collapsed in the 2013-14 offseason, extending J.J. Hardy, the initial acquisition of Mark Trumbo for pennies on the dollar — but there were as many, if not more missteps along the way as well. Free-agent deals for Ubaldo Jimenez and Yovani Gallardo proved to be busts, and the trade sending Jake Arrieta to the Cubs will go down as one of the more lopsided swaps in recent history, even if Arrieta had plenty of chances in Baltimore and was considered to be a project at the time of the deal.

Whoever steps into the GM chair in Baltimore, be it vice president Brady Anderson or an outside hire, will take over a rebuild that Duquette kicked off in earnest this past summer with the trade of Manny Machado to the Dodgers. The Orioles netted five prospects in that trade and, not long after, had also shipped out Jonathan Schoop, Zach Britton, Brad Brach, Kevin Gausman and the remainder of the injured Darren O’Day’s contract — netting a combined 13 new prospects and some significant international funds to aid their reported pursuit of Cuban phenom Victor Victor Mesa.

The Orioles’ farm system has improved with those deals and with the success of some recent draft picks, but the organization still faces a long road back to contention in a stacked AL East division that features a pair of powerhouses in the Red Sox and Yankees, plus a surprising 90-win Rays team that has an impressive young core of stars around which to build.