9:50am: It’s now official, with the Rays announcing the deal.

8:24am: The Rays have agreed to a long-term extension with skipper Kevin Cash, according to Marc Topkin of the Tampa Bay Times. While not yet official, the deal is expected to be formally announced in short order. 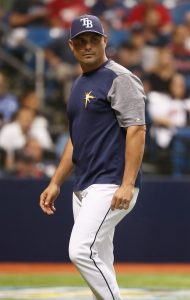 It’s a lengthy new commitment for the Rays, who have now installed Cash through the 2024 season. The contract also includes an option for another year, per Topkin, with financial details still unknown. This pact replaces the prior deal that, according to the report, still included one more season and a two-year option. (Prior indications were that Cash’s deal was for five years in duration, but it seems the final pair of campaigns had not been guaranteed.)

Cash guided the Tampa Bay club to a 90-72 record this season, utilizing a variety of unorthodox means of deploying the roster. While that wasn’t enough to earn a spot in the postseason, the showing created quite a bit of optimism in the near future. It also obviously demonstrated to the front office that Cash is the right person to translate their theories into action.

While it has long seemed that Cash was in harmony with the higher-ups, the results had lagged over his first three years on the job. Hired in a 2014-15 offseason that saw massive organizational change — top baseball ops exec Andrew Friedman and manager Joe Maddon both left town — Cash ended up overseeing a pair of middling 80-82 campaigns sandwiched around a brutal 2016 effort (68-94).

As the 2018 campaign approached, the Tampa Bay organization was under pressure. Panned by the media and pursued by the MLBPA for their cost cutting, the Rays were forced to defend their decision to sell off a series of still-controlled veteran players late in the offseason. The club ended up shipping out yet more veterans, with staff ace Chris Archer (link) following catcher Wilson Ramos (link), starter Nathan Eovaldi (link), closer Alex Colome and outfielder Denard Span (link) out the door during the course of the season.

Despite the exodus of MLB talent, the roster performed admirably. As late in the season as August 5th, the Rays sat at .500. But the team finished on a 34-16 tear. Cash, aided by a data-driven ops department, wielded a variety of emerging young players to excellent effect.

When the season closed, the Rays were left looking at an intriguing depth chart, largely blank future balance sheet, and lauded farm system. There’s even renewed hope of enhanced future revenues, as the organization pursues new ballpark plans, though that’ll certainly take some time and still faces hurdles. Further success on the field would no doubt be a welcome development from a business perspective.

Cash, then, will again be tasked with squeezing value from every corner of the roster. He’ll enter this new phase of his stint with a big vote of confidence and ample job security. Expectations, too, are raised. Much of his roster is set, though it’ll certainly be interesting to see what sort of additional tinkering is pursued over the winter to come.