The Red Sox have officially struck a deal to land righty Nathan Eovaldi from the Rays, as Ken Rosenthal of The Athletic first reported (via Twitter). Young lefty Jalen Beeks will go to Tampa Bay in return, per Marc Topkin of the Tampa Bay Times (Twitter link). 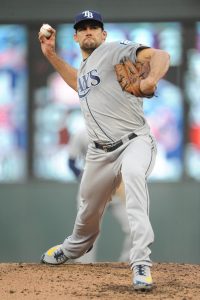 This swap is the second in the last two days that sends rental pitchers between AL East rivals. Yesterday, of course, the Yankees got lefty reliever Zach Britton from the Orioles. The Yanks will temporarily dodge Eovaldi, who had been scheduled to start against them today, but will surely see him down the stretch.

For Boston, the move will add an intriguing arm to their roster. Eovaldi has worked as a starter almost exclusively in his career, and may well continue to do so over the final two months of the season as he helps to shore up a Red Sox rotation that is showing a few cracks. But his role in the postseason could end up being an interesting one. The Sox have an unusual number of southpaws among their rotation candidates, making Eovaldi an interesting pitcher to pair up with one or more lefties.

Eovaldi is a pure rental, and a cheap one at that. He’s earning just $2MM this year, with some affordable incentive pay also included. Though it took him quite a while to make it all the way back from Tommy John surgery, Eovaldi has returned with vigor thus far in 2018.

Over 57 frames in ten starts this year Eovaldi has pumped his customary 97+ mph heat while working to a solid 4.26 ERA. But that only tells part of the story. He’s sporting a career-best 20.1% K%-BB% while generating more swings and misses (11.0%) than ever before, though he has also been touched for 11 long balls. Eovaldi merited rather lofty placement on MLBTR’s latest ranking of the top trade deadline candidates and has certainly increased his stock heading into free agency.

It seems likely the Rays will have designs on using Beeks in a flexible manner, too, but on a more regular basis. The 25-year-old has been roughed up in two MLB outings this year, but has also turned in increasingly interesting results in the upper minors in recent seasons.

Over 16 Triple-A starts in 2018, Beeks carries a 2.89 ERA with 12.1 K/9 and 2.6 BB/9 over 87 1/3 innings. That strong showing led Baseball America to rank Beeks the Sox’ sixth-best prospect in its most recent look at a thin Boston farm. While he’s considered likely to be a back-end rotation piece in the majors, he possesses an interesting four-pitch mix and seems a good fit for the Rays’ counter-culture approach to building a pitching staff.