The Indians announced that they’ve acquired right-hander Chih-Wei Hu from the Rays in exchange for minor league infielder Gionti Turner. The 25-year-old Hu brings Cleveland’s 40-man roster count to 36 players, while the deal gives the Rays organization some flexibility in advance of tomorrow’s deadline to protect additional players from the Rule 5 Draft. 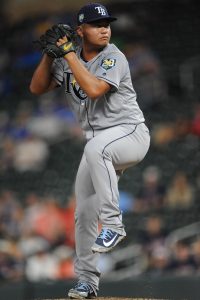 Hu, 25, made his big league debut with Tampa Bay back in 2017 and, over the past two seasons, has pitched to a 3.52 ERA with a 21-to-7 K/BB ratio in 23 innings of big league relief. He’s averaged 93.2 mph on his heater in that time and generated a solid 11.6 percent swinging-strike rate in addition to a 32.2 percent chase rate on pitches out of the strike zone. As an extreme fly-ball pitcher, he’s been a bit homer-prone in his small sample of Major League work.

Tampa Bay initially acquired Hu from the Twins in a 2015 swap that sent Kevin Jepsen from the Rays to the Twins. Minnesota initially signed the Taiwanese-born righty as an amateur free agent back in August 2012. He’s done the entirety of his work in the Majors as a reliever, though the bulk of his minor league career has been spent as a starter. He could give Cleveland some depth in both regards, though given the current state of the Indians’ roster, the clearer path for him to contribute in the big leagues is in a relief capacity. Hu does have a minor league option remaining, so he can be sent to Triple-A Columbus to open the season without being exposed to waivers. In 174 2/3 innings at the Triple-A level, he has a 4.07 ERA with 8.3 K/9 against 2.4 BB/9.

The 18-year-old Turner had an exceptionally brief tenure as a member of the Indians organization. Cleveland selected him the 27th round of this past summer’s draft, and he went on to appear in 46 games for the club’s Rookie-level affiliate in the Arizona League. He acquitted himself well, hitting .296/.348/.396 with a homer, 10 doubles, two triples and nine steals in 187 plate appearances. Turner spent 261 innings at second base, 103 innings at shortstop and 34 innings in center field during that brief professional debut.