Dec. 21: The Athletics have officially announced Soria’s two-year contract. Their 40-man roster is up to 38 players.

11:05pm: USA Today’s Bob Nightengale tweets that the two sides do indeed have an agreement, in principle. Soria’s contract will check in with a total value in the $15-15.5MM range, tweets Jesse Sanchez of MLB.com.

10:51pm: The Athletics are closing in on a two-year contract with free-agent reliever Joakim Soria, reports Ken Rosenthal of The Athletic (Twitter link). The right-hander still has to pass a physical, per Rosenthal, and there are still some final details to be ironed out before the deal comes to fruition. Soria is represented by Oscar Suarez. 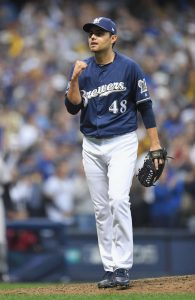 In many respects, in fact, the 2018 season was one of the best, if not the best of Soria’s impressive big league career. He averaged personal bests in swinging-strike rate (14.4 percent) and  opponents’ chase rate (34.3 percent), and his 2.44 FIP and 2.88 SIERA were among the best marks of his 12-year MLB career as well. Perhaps most impressively, the 83.6 mph average exit velocity that Soria allowed to opponents registered as the lowest of any pitcher in baseball (min. 150 batted ball events), per Statcast.

Much of the emphasis for the A’s this offseason has centered around the team’s rotation needs (with good reason), but adding Soria to the mix will give Oakland another quality reliever to join the likes of Blake Treinen, Yusmeiro Petit, Lou Trivino, Fernando Rodney and Ryan Buchter. That’s a solid collection of relievers, which figures to be more important for the A’s than most other clubs, assuming they plan to continue utilizing “the opener” tactic and piecing together the occasional game via “bullpenning.”

While Soria unequivocally improves the pitching staff as a whole, the A’s still have a clear, pressing need for some pitchers who can offer more innings than the aforementioned bunch. Oakland will be without Sean Manaea for the entire 2019 season due to shoulder surgery, while right-handers Jharel Cotton and Daniel Gossett will be on the mend from Tommy John surgery early in the season. The same is true of top pitching prospect A.J. Puk, and another rotation option, Andrew Triggs, will be recovering from thoracic outlet surgery.

At present, the Oakland rotation is a muddled mess, with the likes of Daniel Mengden, Frankie Montas, Paul Blackburn, Chris Bassitt, Aaron Brooks, Tanner Anderson and Grant Holmes among the options from which the organization can choose. The A’s, somewhat unthinkably, managed to win 97 games in a season where their most prominent starters beyond Manaea were Trevor Cahill, Brett Anderson, Edwin Jackson and Mengden. That, however, seems highly unlikely to be a repeatable feat, and the A’s are expected to add some more experienced rotation pieces as the winter progresses.

A two-year commitment to Soria in the $15.5MM range is within reasonable proximity, albeit a bit shy, of the two-year, $18MM contract MLBTR estimated when ranking the game’s top 50 free agents in early November. Among participants in MLBTR’s Free Agent Prediction Contest, just 3.2 percent correctly pegged Soria to land in green and gold this winter.