12:20pm: The Blue Jays have announced the signing.

10:24am: Shoemaker can earn an additional $1MM via incentives, Passan tweets, which would push his 2019 earnings up into the same range as his previous arbitration projection.

9:50am: The contract will pay Shoemaker $3.5MM, tweets Shi Davidi of Sportsnet.

8:51am: The Blue Jays are in agreement on a one-year, Major League contract with free-agent righty Matt Shoemaker, reports Jeff Passan of Yahoo Sports (via Twitter). Toronto has an open spot on the 40-man roster, so a corresponding roster move won’t be necessary. Shoemaker is represented by ISE Baseball. 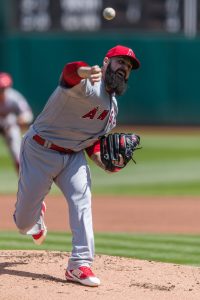 Shoemaker, 32, was a late addition to the free-agent market on Nov. 30 after the Angels decided to non-tender the oft-injured righty rather than pay him a projected $4.3MM salary in arbitration.Because of that non-tender, he ht the open market with four years, 166 days of Major League service time under his belt, meaning he’ll be controllable through the 2020 season, via arbitration, if he can reestablish himself in Toronto.

That said, there’s also reason for optimism with Shoemaker. Though his 4.94 ERA in 31 innings this past season won’t impress anyone, he averaged a career-high 9.6 strikeouts per nine innings in that brief span and recorded a career-best 13.6 percent swinging-strike rate, as well. Perhaps there’s some small-sample noise at play there, but Shoemaker’s splitter was a demonstrably more effective pitch in his limited time on the mound in his final season with the Halos.

It’s also worth noting, of course, that Shoemaker was a solid mid-rotation starter for the Angels from 2013-16, working to a combined 3.75 ERA (3.76 FIP) with averages of eight strikeouts, 1.9 walks and 1.2 home runs per nine innings pitched.