May 24: The Padres announced that Naylor’s contract has been selected from Triple-A El Paso. Outfielder Alex Dickerson has been placed on the 10-day injured list due to a sprained right wrist, thus opening a 25-man roster spot, while lefty Aaron Loup’s transfer from the 10-day IL to the 60-day IL opens a spot on the 40-man roster.

May 23: The Padres are planning to promote outfield prospect Josh Naylor, according to Dennis Lin of The Athletic (via Twitter). Corresponding roster moves aren’t yet known. 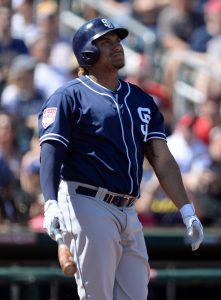 This decision adds to the interest in tomorrow’s matchup in Toronto, which will already feature just-promoted Blue Jays prospect Cavan Biggio. As Lin notes, Naylor is a Toronto-area native, hailing from neighboring Mississauga. Still another Ontarian, Cal Quantrill, will start Saturday’s game for the Friars.

Naylor was taken with the 12th overall pick of the 2015 draft by the Marlins. He ended up being shipped to San Diego in the partially undone 2016 trade — a transaction that came close on the heels of another swap in which the Friars picked the pocket of the Miami organization.

Primarily a first baseman to begin his professional career, Naylor has been shifted to a corner outfield role more recently in a bid to find a home for his bat. He’s still learning his way around the outfield grass, but has continued to ramp up his productivity at the plate while moving into the upper ranks of the Friars farm.

Naylor received at least one top-100 leaguewide prospect grade entering the present season, with Baseball America slotting him in at #99, and he has certainly boosted his stock since. So far this year, Naylor carries a .299/.378/.538 batting line through 209 plate appearances at Triple-A. He has swatted ten home runs and walked as many times as he has struck out (24 apiece), making for a nicely balanced offensive profile.

Bringing Naylor up is going to require both 40-man and active roster space. It’s fair to wonder whether the time is up for Alex Dickerson, who returned this year from a lengthy run of poor injury luck. He devastated Triple-A pitching but has managed just three singles while going down seven times on strikes in his 19 MLB plate appearances.