Tyler Skaggs passed away today at 27 years of age, according to an announcement from the Los Angeles Angels. Tonight’s scheduled game against the Rangers has been postponed. MLBTR joins all those around the game in mourning his untimely loss. 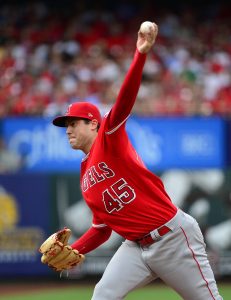 The Angels organization issued a statement as follows:

“It is with great sorrow that we report Tyler Skaggs passed away earlier today in Texas. Tyler has, and always will be, an important part of the Angels Family. Our thoughts and prayers are with his wife Carli and his entire family during this devastating time.”

According to a press release from the Southlake Police Department (Twitter link), officers were summoned to the team hotel early this afternoon. They found Skaggs “unresponsive and he was pronounced deceased at the scene.” The department stated that, “at this time, no foul play is suspected.” Neither is suicide suspected to be the cause of death, the department later released (via Jeff Fletcher of the Orange County Register).

Skaggs graduated from California’s Santa Monica High School. He began his professional career with the hometown Angels organization, which selected him in the first round of the 2009 MLB draft — just months after the tragic passing of Halos pitcher Nick Adenhart. Skaggs was traded to the Diamondbacks organization and made his MLB debut in Arizona in July of 2010. He was traded back to the Angels in December of 2013 and had played for the L.A. team ever since.

This season was the seventh in which Skaggs had logged innings at the game’s highest level. He was finally been on track for a fully healthy season after so many prior campaigns were marred by (or lost altogether to) injury. Skaggs took the ball on Monday, making his 96th MLB start. In 520 2/3 career innings, he pitched to a 4.41 ERA.