TODAY: Per Craig Mish of FNTSY Radio, the trade has been finalized with the Marlins sending cash considerations to the Twins. It had been previously reported that Minnesota would receive a player to be named later in addition to Romo and Vallimont.

7:48pm: Righty Chris Vallimont is the minor league pitcher going to Minnesota, per Mark Feinsand of MLB.com. They’re also getting a player to be named later, Jon Morosi of MLB.com reports.

7:33pm: Romo is indeed going to the Twins, Jon Heyman of MLB Network tweets. The Twins are also getting a minor league pitcher, Joel Sherman of the New York Post relays. The Marlins will acquire first base prospect Lewin Diaz, according to Betsy Helfand of the Pioneer Press.

7:28pm: The Twins are “deep into talks” to acquire Marlins reliever Sergio Romo, Jeff Passan of ESPN reports. A deal’s likely to be completed. 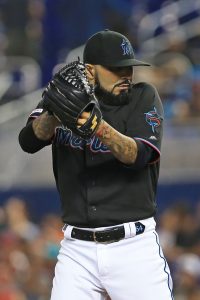 The 36-year-old Romo served his purpose for the rebuilding Marlins, who signed him for $2.5MM in free agency last winter with the intent of eventually trading him. A former Giant, Dodger and Ray, the three-time world champion continued his effectiveness in Miami, where he notched a 3.58 ERA/3.88 FIP with 7.88 K/9 against 3.11 BB/9 in 37 2/3 innings. Romo also converted 17 of 18 save attempts.

Romo’s velocity maxes out in the mid-80s, making him one of the game’s least imposing hurlers, and he only induces ground balls at a 36.4 percent clip. However, Romo has long shown a penchant for forcing a boatload of infield pop-ups, having done so 14 percent of the time this season, and generating a large amount of soft contact. Romo ranks near the top of the league in hard-hit rate and exit velocity against, according to Statcast, which credits him with an even better expected weighted on-base average against (.276) than the .282 wOBA hitters have mustered off him this year.

Based on his career production and the numbers he has totaled this season, Romo should be a welcome pickup for the Twins, who’ve been in the market for bullpen help for weeks. And his addition shouldn’t preclude them from finding more late-game aid in the coming days. The Twins’ bullpen entered play Saturday ranking better than average in K/BB ratio (ninth) and FIP (11th), but the unit’s closer to middle of the pack in ERA  (14th). Moreover, the Twins have jettisoned a handful of notable relievers – Mike Morin, Matt Magill, Adalberto Mejia and Blake Parker – since last week. Those four combined for just over 100 innings of work as part of Minnesota’s relief corps this season. Of their remaining arms, only closer Taylor Rogers and setup man Ryne Harper have recorded easily above-average numbers over a large sample of work.

In Diaz, 22, the Twins are parting with a player they originally signed out of the Dominican Republic for $1.4MM in 2013. Baseball America (subscription required) just ranked Diaz as the Twins’ 10th-best prospect earlier this month. BA lauds Diaz’s defensive ability at first, though it’s worth pointing out he has also excelled on the offensive side in 2019. After opening the season on a tear at the High-A level, Diaz advanced to Double-A for the first time and has since slashed .309/.348/.602 (165 wRC+) with six home runs in 135 plate appearances.

Also 22, Vallimont joined the Marlins as a fifth-round pick just last year. Back then, BA highlighted Vallimont’s fastball – which can hit 96 mph – and “wipeout slider.” More recently, the outlet rated as him as Miami’s 27th overall prospect. Vallimont has produced terrific results this year between the Single-A and High-A levels, where he has combined for a 3.16 ERA with 10.4 K/9 against 3.2 BB/9 in 105 1/3 innings.