DECEMBER 18: This deal is now official.

DECEMBER 11: The Blue Jays have agreed to a deal with free-agent right-hander Tanner Roark, Ben Nicholson-Smith and Shi Davidi of Sportsnet report. It’s a two-year, $24MM accord, per Jon Heyman of MLB Network. Roark is a client of Matt Colleran.

This is a better payday than expected for Roark, who MLBTR predicted Toronto would sign to a two-year, $18MM contract at the outset of the offseason. Nevertheless, if Roark’s history is any indication, he should give the Blue Jays some much-needed stability in their rotation. The rebuilding club, whose starting staff looked like an enormous weakness entering the winter, has shown some level of interest in just about every free-agent rotation piece. The Blue Jays have added two so far between Roark and fellow righty Chase Anderson, whom they acquired in a trade with the Brewers, and it wouldn’t be surprising to see Toronto pick up yet another notable starter before the offseason’s out. 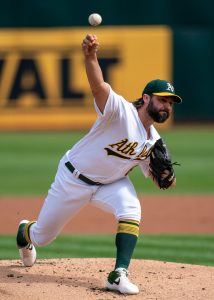 The 33-year-old Roark will head north after dividing the first seven seasons of his career among Washington, Cincinnati and Oakland. Roark produced sub-3.00 ERA results three times as a member of the Nationals toward the beginning of his career, but he has settled into more of a mid- to back-end type in recent seasons. Roark notched an ERA and a FIP somewhere in the 4.00s in each of the previous three seasons, also totaling 160-plus innings in all of those years.

Most recently, Roark fired 165 1/3 frames between the Reds and Athletics in 2019, when he posted a 4.35 ERA/4.67 FIP with a career-best 8.6 K/9 against 2.78 BB/9, though he did manage a personal-worst groundball rate of 36.2 percent. The latter figure helped lead to a career-worst 15.5 percent home run-to-fly ball rate, but Roark was hardly alone in giving up more long balls than ever during a homer-happy year across the majors.

The Blue Jays are no doubt hopeful Roark’s HR/FB rate will return closer to his lifetime mark of 11.3 percent going forward. Regardless, he’s now the most accomplished starter on a starting staff that bid adieu to Marcus Stroman and Aaron Sanchez in trades over the summer. Among Jays holdovers, only the relatively unproven Jacob Waguespack and Trent Thornton piled up 70 or more innings as starters in 2019.