DECEMBER 16: Texas has announced the signing. 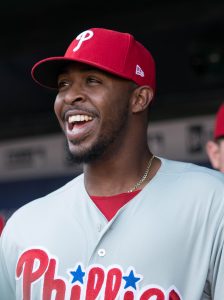 The pact comes with a club option for a third year, per Jeff Passan of ESPN, and MLBTR’s Steve Adams further reports that the contract would be worth $8MM if the option is exercised. Rodriguez spent most of the previous two years, including all of last season, in Japan as a member of the Chunichi Dragons.

This move represents something of a homecoming for the 28-year-old Rodriguez, a reliever who pitched with the Rangers’ Triple-A affiliate in 2017. However, Rodriguez didn’t take a major league mound as a Ranger during his prior stint with the club. To this point, all of his MLB experience has come as part of the Phillies, with whom he combined for 36 2/3 innings from 2016-17. Rodriguez struggled to prevent runs over that short span, evidenced by a 5.40 ERA, and posted a dismal K/BB ratio of 1.32 with 6.14 K/9 and 4.6 BB/9. He did, however, induce groundballs at a strong 58.3 percent clip.

Rodriguez hasn’t thrived in the majors thus far, and the same applies to his time in Triple-A. At the minors’ top level, he owns a 5.38 ERA with 6.8 K/9 and 4.3 BB/9 across 164 innings. To Rodriguez’s credit, though, he starred in Japan. Over 87 2/3 frames as a Dragon, Rodriguez put up a stingy 1.85 ERA and logged 10.6 K/9 and 2.9 BB/9. He parlayed that success into an unexpected payday in the majors, where he’ll return to join a Rangers team that has been aggressive on the pitching market this winter. They previously added starters Kyle Gibson and Jordan Lyles on contracts worth a combined $44MM.

As was the case with their rotation, the Rangers entered the offseason with bullpen issues, as their relief corps finished 2019 with mediocre marks. Going forward, it seems likely they’ll count on Rodriguez as one of their late-game bridges, though it’s anyone’s guess whether he’ll be able to carry the excellence he displayed in Japan to Texas.