The Rockies have reached a contract extension with reliever Scott Oberg, Bob Nightengale of USA Today reports. It’s a three-year, $13MM deal with an $8MM club option for 2023. However, the pact contains escalators that could push the value to $15MM over three years and $26MM for four, per Ken Rosenthal of The Athletic. Oberg is a client of agent Brian Charles of Big League Management Company, LLC. 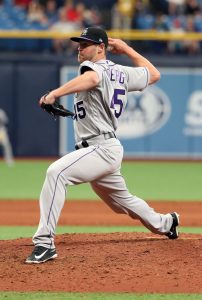 Prior to this extension, Oberg had been projected to earn $2MM via arbitration in 2020. That will still be the case, according to the New York Post’s Joel Sherman, who adds that Oberg will be guaranteed $4MM in 2021 and and $7MM in ’22. This extension will overlap with his final two arbitration-eligible campaigns and, if the option is exercised in a few seasons, buy out two free-agent years.

The fact that Oberg has become a core piece for the Rockies is fairly remarkable, as the team didn’t invest much in him (a 15th-round pick) when it drafted him in 2012. The right-handed Oberg became a regular out of the Colorado bullpen in 2015, but he didn’t truly blossom until 2018.

Oberg has quietly been one of the game’s most effective relievers since his breakout season, having relied on a fastball-slider combo to log a 2.35 ERA/3.20 FIP with 9.03 K/9, 2.75 BB/9 and a strong 52.7 percent groundball rate across 114 2/3 innings. Looking at Oberg’s home/road splits, it’s clear pitching at the hitter-friendly Coors Field hasn’t really fazed the 29-year-old in recent seasons.

Oberg did see his overall production plummet as 2019 progressed, but he was dealing with significant health worries then that affected his numbers. He didn’t take the mound past Aug. 16 on account of blood clots in his right elbow, which forced him to undergo surgery to address the issue. That was the second time Oberg has battled blood clots during his career, but there doesn’t seem to be any concern on the part of him or the Rockies that it’ll be an ongoing problem.