The Diamondbacks and outfielder David Peralta are in agreement on a three-year extension that’ll guarantee the ACES client a total of $22MM, reports USA Today’s Bob Nightengale (Twitter links). He can earn another $1.25MM annually via incentives. The contract will pay Peralta $7MM in 2020 and $7.5MM in each of the two subsequent seasons, tweets Nick Piecoro of the Arizona Republic. 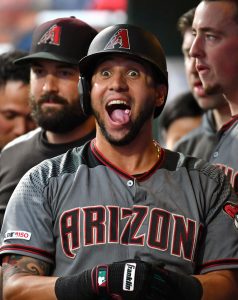 Peralta was arbitration-eligible for the final time and was projected by MLBTR contributor Matt Swartz to earn $8.8MM. Instead, he’ll sign away a pair of free-agent years on a contract that spans his age-32 through age-34 seasons.

The deal looks to be a sound one for the D-backs, who owed Peralta a raise on last season’s $7MM salary. While the exact number he’d have secured can’t be known, even if he’d fallen shy of his $8.8MM projection, it still looks as though Peralta is signing away two free-agent years at a total of no more than $14MM. That falls a bit shy of what Corey Dickerson just received from the Marlins ($17.5MM), though it’s worth noting that Peralta is a bit older. All the same, Arizona looks to have carved out a nice value with the move.

Both Baseball-Reference (8.4) and FanGraphs (7.7) agree that Peralta has been worth in the vicinity of eight wins above replacement over the past three years. He’s consistently been an above-average bat and at least an average defender in the outfield corners, and his 2019 season rated particularly well according to most defensive metrics, as he took home a Gold Glove Award. While there’s always some risk of decline as he enters his mid-30s — particularly coming off a shoulder issue — it’s easy to see why the Diamondbacks preferred to keep him in the fold beyond his preexisting level of club control.

From a payroll standpoint, the deal actually helps to lower Arizona’s bottom line in 2020. Peralta’s salary for the coming season is the same as his 2019 salary and $1.8MM shy of where he’d been projected in arbitration, leaving the club with a roughly $114MM payroll (per Roster Resource’s Jason Martinez). The D-backs had less than $60MM on the books in 2021 and less than $40MM in 2022 prior to brokering this multi-year arrangement, so fitting him onto the ledger for an additional two seasons was rather easy.