January 9: The Diamondbacks have announced the signing.

January 8, 3:10pm: Rondon’s option is valued at $4MM and can increase to $5MM based on games finished, per MLB Network’s Jon Heyman (Twitter link).

2:20pm: The D-backs have agreed to terms with right-handed reliever Hector Rondon on a one-year deal with a club option for the 2021 season, Nick Piecoro of the Arizona Republic reports. Rondon, an Octagon client, will receive a $3MM guarantee that comes in the form of a $2.5MM salary and $500K buyout on the club option. The deal is pending a physical. 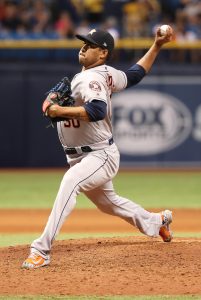 A larger payday for Rondon might’ve been in order had he not taken some notable steps back in 2019. The righty’s 7.1 K/9, 18.7 percent strikeout rate and 9.8 percent swinging-strike rate were the lowest marks of his seven-year big league career. And, after demonstrating pristine control with the Cubs in 2015-16, Rondon has continued to issue walks at roughly the league average rate dating back to the 2017 campaign.

That said, Rondon still averaged nearly 97 mph on his heater this past season and maintained a respectable 3.71 ERA. He’ll give the D-backs another experienced late-inning arm to pair with the likes of Archie Bradley and Andrew Chafin. Rondon is the second veteran arm added by general manager Mike Hazen and his staff this winter, as the team also signed former Brewers righty Junior Guerra to join the late-inning mix. There’s certainly still room for improvement and outside additions, but the bullpen has added a bit more stability without taking on a substantial financial risk.

With Rondon on board, Arizona current projects to have an Opening Day payroll of roughly $117MM, though additional roster machinations will almost certainly impact the final tabulation. It’s still possible that left-hander Robbie Ray could be marketed to other clubs as he enters his final season of team control, and the Diamondbacks could also continue to explore further bench and bullpen upgrades.