JANUARY 14: The Nats have announced the signing.

JANUARY 6, 3:29pm: The deal’s worth $11MM with up to $1MM in performance bonuses based on games finished, per Passan. The total falls in line with the two-year, $12MM guarantee MLBTR projected for Hudson at the beginning of the offseason.

2:17pm: The Nationals and free-agent reliever Daniel Hudson have reached a two-year contract, Jon Heyman of MLB Network tweets. Jeff Passan of ESPN first reported the two sides were nearing an agreement. Hudson is a client of Jet Sports Management. 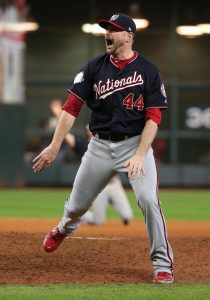 This is the second significant bullpen signing in a matter of days for the Nationals. They added righty Will Harris on a three-year, $24MM commitment last week, and signing him and Hudson shows a desire on the team’s part to avoid last season’s well-publicized bullpen foibles. The Nationals’ relief corps was a major problem throughout the season, but they still earned a wild-card spot and then rallied to win their first-ever World Series title. Hudson, whom general manager Mike Rizzo acquired from the Blue Jays before the July 31 deadline, was a key reason for Washington’s triumph.

Between Toronto and D.C. a season ago, the flamethrowing Hudson, 32, put up a 2.47 ERA/3.97 FIP with 8.75 K/9 and 3.33 BB/9 over 73 innings. For the most part, those aren’t great numbers, and Hudson hasn’t been lights-out for the majority of his career, but he was an important part of the Nats’ playoff run. Hudson converted all four of his save attempts in the postseason, in which he threw 9 2/3 frames of four-earned run ball with 10 strikeouts against four walks, and closed out the Astros in Game 7 of the World Series.

While the Nationals did lose star third baseman Anthony Rendon to the Angels earlier this offseason, the Hudson re-signing continues a busy winter for the club. Before bringing back Hudson, they picked up Harris and re-signed four important members of their title-winning team in starter Stephen Strasburg, infielders Howie Kendrick and Asdrubal Cabrera, and catcher Yan Gomes. The team also agreed to sign established infielder Starlin Castro last week, and it could still be in the running for the No. 1 free agent available in third baseman Josh Donaldson.

An ideal offseason for the Nationals likely would’ve meant keeping Rendon. Even in the wake of his departure, though, it’s clear this isn’t a club that’s ready to rest on its laurels after a championship season.