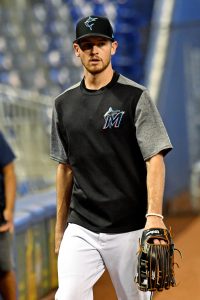 Riddle, 28, was once considered to be among the more promising farmhands in the Marlins organization but was unable to establish himself in parts of three MLB seasons in Miami. Through 718 plate appearances, Riddle managed just a .229/.269/.368 batting line, which proved tepid enough that the Marlins eventually cut ties with him earlier this offseason.

Although he’s been unable to produce much at the MLB level, Riddle does carry a heartier .284/.321/.457 slash in 85 Triple-A contests. The former 13th-rounder and University of Kentucky product rose through Miami’s system primarily as a shortstop, but the Marlins began trying him out in center field in recent seasons as well. Riddle has played far more shortstop than any other position, but he does come to the Pirates with experience at second base, third base and in all three outfield slots.

Miami surely felt comfortable trying Riddle out at new defensive positions due to Miguel Rojas’ presence at shortstop, but the decision to pull Riddle away from short was still somewhat curious given how well he’s graded out at the position. In 1323 Major League innings at shortstop, Riddle notched 13 Defensive Runs Saved, 10 Outs Above Average and a 3.1 Ultimate Zone Rating.

Twenty-six-year-old Kevin Newman currently projects to be the Pirates’ everyday option at short, but Riddle can give the club some depth there while also presenting them an option to play in center field following the departure of the recently traded Starling Marte. In the days since that trade, general manager Ben Cherington has been open about his desire to add some more options in center field, and while Riddle would seemingly qualify, it’s also of some note that the team’s press release announcing the move refers to Riddle solely as an infielder.

Riddle is out of minor league options, so today’s signing is a clear indicator that the Pirates will carry him on the big league roster to open the season. He has two years, 118 days of Major League service time, meaning he’s controllable not just for the 2020 season but all the way through the 2022 campaign. Riddle will be arbitration-eligible next winter.