February 3: The Mariners have announced a contract extension with southpaw Marco Gonzales. He’s now guaranteed $30MM from 2021 through 2024, Ken Rosenthal of The Athletic tweets. The deal includes a $15MM club option for another campaign, per MLB Network’s Jon Heyman (Twitter link). 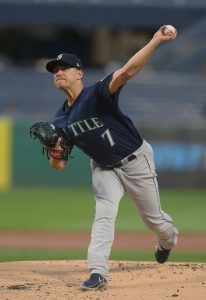 Though it has been a fairly quiet winter for the Seattle organization, the club has now managed to strike two notable long-term deals. The other was a surprising pre-debut pact with first base prospect Evan White.

Gonzales, who was already under contract for the 2020 season, had been on track to qualify for arbitration next winter. He’d have reached the open market at the end of the 2023 campaign. Instead, the M’s have now secured his services for one would-be free agent campaign while picking up an option for another.

As he’s now closing in on his 28th birthday, Gonzales will now be under team control through his age-33 campaign. Given the costs involved, it was a pretty easy bet for the team to make. And it’s equally understandable that the CAA Sports client was interested in locking in earnings at this stage of his career.

Gonzales has been quite effective since coming over from the Cardinals in a mid-2017 trade. Over the past two seasons, he has carried a 3.99 ERA over 369 2/3 innings with 7.1 K/9 and 2.1 BB/9. While there’s nothing especially about his stuff or his peripherals, Gonzales has successfully tamped down on the long ball and studiously avoided hard contact.

It’s certainly not the typical profile of an extension target. Gonzales sits in the 90 mph range with his fastballs and managed only a 7.9% swinging-strike rate last year. Neither is he a groundball monster. But he was able to keep hitters off balance by utilizing five pitches with equivalent frequency — none less than 15.9% of the time and none more than 24.1%.