Longtime major leaguer Martin Prado has officially called it a career, Jon Heyman of MLB Network tweets. Heyman first reported back in November that Prado was likely to retire. 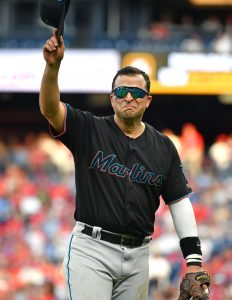 Now 36 years old, the Venezuela-born Prado began his professional career when he signed with the Braves in 2001. He debuted with the Braves in 2006, and two years later, he started to establish himself as an effective big leaguer. During his Braves heyday from 2008-12, Prado slashed .296/.346/.438 with 51 home runs, 30 stolen bases and 13.2 fWAR in 2,688 plate appearances, garnering time all over the infield and in left field along the way. He also earned his lone All-Star nod (2010) during his run in Atlanta.

Although Prado was rather productive as a Brave, they dealt him to the Diamondbacks prior to the 2013 season in a large trade that sent outfielder Justin Upton to Atlanta. The Diamondbacks quickly locked up Prado to a four-year, $40MM contract, though he only lasted a little more than a season in their uniform. They sent him to the Yankees in July 2014, but his time in New York was also fleeting. After just a few months as a Yankee, they shipped him to the Marlins ahead of the 2015 campaign.

Prado found a multiyear home in Miami, where he finished his career. He was a highly productive member of the Marlins’ roster during his first two seasons with the club, earning yet another $40MM guarantee (this time for three years) in September 2016. However, thanks in part to various injuries, Prado was unable to live up to the payday. He appeared in just 195 of a possible 486 regular-season games from 2017-19, during which he struggled to a .241/.276/.313 line and totaled only five homers in 616 trips to the plate.

Although his time in the majors didn’t end with a flourish, Prado enjoyed a much better career than most. He’ll wrap it up as a lifetime .287/.335/.412 batter with 100 HRs, 40 steals and 20.8 fWAR in 5,861 PA. Prado also earned just over $89MM in MLB, according to Baseball-Reference. MLBTR congratulates Prado for his accomplishments and wishes him well in retirement.