In a major deadline swap that no one could’ve foreseen a month ago, the Marlins announced Monday that they’ve acquired All-Star center fielder Starling Marte from the D-backs. Heading to Arizona are lefty Caleb Smith, right-hander Humberto Mejia and a player to be named later (reportedly Class-A lefty Julio Frias). 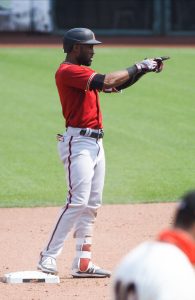 Not long before the trade was agreed upon, Joel Sherman of the New York Post reported that the D-backs throughout the day had been signaling to other teams that they don’t expect to pick up their $12.5MM club option on Starling Marte.

The aversion to picking up the option on Marte registers as a major surprise. It’s certainly not for any lack of production; Marte has been flat-out excellent in Arizona, hitting at a .311/.384/.443 clip with a pair of homers, eight doubles, a triple and five steals. His defense in center has graded out as +0.5, per Ultimate Zone Rating, and -2 per Defensive Runs Saved. Through 33 games, FanGraphs has Marte at 1.1 WAR, while Baseball-Reference has him at 0.9 — a pace that is roughly in line with Mate’s characteristic 3-4 WAR output.

Of course, the 2020 season has brought about some pressing revenue losses for all 30 clubs, and D-backs owner Ken Kendrick was among the most outspoken owners about the hardships faced by teams with fans unable to attend games. Kendrick pined for revenue sharing with players, placing the blame on them for the difficult negotiations and steadfastly expressing that owners would not green-light any scenario that saw games played into November.

As surprising as the fact that the D-backs are moving on from Marte is the fact that the Marlins are the team that will acquire him. Miami entered the season expected to be a cellar-dwelling outfit in the NL East, and those expectations only grew when more than half their active roster was sidelined by a team-wide Covid-19 outbreak. But Miami has continued to persevere, hovering around the .500 mark and now sitting in a tie for a postseason bid in the National League. Some exciting young players, Sixto Sanchez perhaps chief among them, have made their big league debuts in 2020, as other young talents like Pablo Lopez have taken substantial steps forward.

Miami’s move to add Marte comes in simultaneous conjuncture with another trade shipping the versatile Jonathan Villar to the Blue Jays. Marte will now step into his roster spot while making up for some of the speed lost with the Villar trade (and more overall offensive output). He’ll cost the Marlins an additional $1.71MM in 2020 — the remainder of this year’s prorated $11.5MM salary — and they’ll surely be picking up that $12.5MM option, given the price they paid to acquire him.

Moving forward, that’ll position the Marlins to trot out an outfield with Corey Dickerson in left field, Marte in center and some combination of Harold Ramirez, Monte Harrison, Lewis Brinson, Jesus Sanchez, Garrett Cooper or an outside addition to patrol right field. Alternatively, the Fish could push Brian Anderson back to right field and pursue a new third base option, though their abundance of in-house outfield options makes that seem less likely. Assuming that the options on both Marte and Brandon Kintzler are picked up, the Marlins will have $35.85MM on the 2021 books before arbitration raises to Anderson, Jorge Alfaro, Jesus Aguilar, Ryne Stanek and Yimi Garcia, among others.

The 29-year-old Smith, controlled through 2023, has missed bats in droves since being acquired from the Yankees prior to the 2018 season (259 punchouts in 233 2/3 innings). He’s also been plagued by injuries in that time, though, including a brutal Grade 3 lat strain in 2018 and a hip injury that cost him just shy of a month last year. Smith was placed on the injured list earlier this month after the Marlins’ Covid-19 outbreak and has pitched just three innings so far. He looked rusty, issuing six free passes in that time. Overall, he has a 4.39 ERA and 10.0 K/9 against 3.8 BB/9 in his time with Miami.

But Smith also fits the modus operandi we frequently see under general manager Mike Hazen in Arizona. Rather than moving Marte for well-regarded but unproven prospects, he’s instead added a big league arm who can step immediately onto the roster and help this year and for years to come. Smith, in many ways, gives the Snakes a replacement for the recently traded Robbie Ray — one who bears some stark similarities to Ray, as a high-strikeout lefty with occasional control difficulties.

Also able to provide help in the very near future will be the 23-year-old Mejia, who made his big league debut earlier this season. He’s allowed six earned runs on 13 hits and six walks with 11 strikeouts in eight MLB innings. His promotion to the big leagues was in some ways necessitated by the aforementioned outbreak, as he’d yet to even pitch at Double-A when he was promoted. The Diamondbacks may well want to get Mejia some additional development time before bringing him to Chase Field, but he’s already on the 40-man roster and has gotten his feet wet in the bigs, so he’s a viable option anytime moving forward.

As for Frias, he’ll give Arizona a 22-year-old southpaw who shined as a 21-year-old in short-season Class-A last year, when he pitched to a 2.83 ERA with a 73-to-23 K/BB ratio in 70 innings. Frias isn’t considered among the Marlins’ best prospects, but Miami has a relatively deep system after years of rebuilding moves. FanGraphs called Frias a “low-slot lefty” whose heater touches 97 mph but who has battled poor command at times. He’s a much further-off piece, but any club would welcome the opportunity to add a power-armed, left-handed lottery ticket.

SportsGrid’s Craig Mish broke the news that the two sides were close to a deal (Twitter link). Joel Sherman of the New York Post reported (on Twitter) that a deal had been reached. MLB Network’s Jon Heyman, MLB.com’s Mark Feinsand and The Athletic’s Ken Rosenthal reported various aspects of the return (all Twitter links).