August 9: Howard has officially been promoted to the Phils’ active roster. His addition comes with a couple of corresponding roster moves, as reported by Todd Zolecki of MLB.com: RHP Enyel De Los Santos was designated for assignment to clear a spot on the 40-man roster, and left-hander Cole Irvin was optioned off the active roster to the team’s alternate training location.

August 8: Phillies pitching prospect Spencer Howard is set to make his Major League debut on Sunday.  According to Scott Lauber of the Philadelphia Inquirer, Howard has been told that he will be starting one of tomorrow’s games in the Phils’ doubleheader with the Braves.  Another transaction will need to be made in order to open room for the right-hander on the 40-man roster. 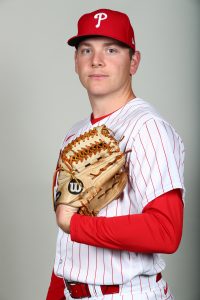 Nevertheless, there was speculation dating back to Spring Training that Howard would eventually suit up for the Phillies in 2020, even if the club was looking to manage his innings so as to not over-extend his arm.  As per Lauber back in March, the shortened nature of the 2020 season will help Howard in this regard, as he could now end up pitching quite a significant portion of the schedule for a team in need of pitching depth.  Due to the week of postponed games in the wake of their exposure to the Marlins’ COVID-19 outbreak, the Phillies have only played seven games, and Sunday is the first of six doubleheaders remaining on Philadelphia’s schedule.

While Howard’s lack of Triple-A experience provides a reasonable case for the Phillies in holding off on his big league promotion, it should also be noted that waiting until a couple of weeks into the season ensures the Phils an extra year of control over Howard before he gains enough service time for free agency.

Howard is a consensus choice as one of baseball’s top pitching prospects, with Keith Law, Fangraphs, Baseball America, MLB Pipeline, and Baseball Prospectus all ranking him between 22nd (from Law) and 36th (BP) on their preseason lists of the sport’s best minor leaguers.  A fastball that regularly sits in the mid-90’s and has gone as high as 99mph is Howard’s signature pitch, and he also has what Fangraphs describes as “three nasty secondary pitches” in a curveball, changeup, and slider, though all of these offerings are less consistent.  Howard’s control is also solid, as Baseball America’s notes that his “delivery is simple and repeatable.”