In an eye-opening promotion, the White Sox have selected the contract of left-hander Garrett Crochet, general manager Rick Hahn announced to reporters today (Twitter link via Daryl Van Schouwen of the Chicago Sun-Times). Chicago drafted the 21-year-old lefty out of Tennessee with the 11th overall pick of the 2020 draft. Righty Evan Marshall is going on the 10-day injured list with shoulder inflammation, which opens an active roster spot. Right-hander Ian Hamilton was designated for assignment to open a spot on the 40-man roster. 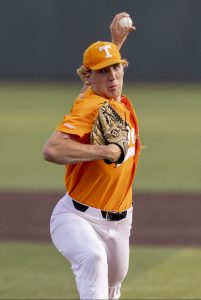 It’s obviously of the utmost rarity for a prospect to skip the minor leagues entirely, which Crochet will be doing in the absence of a conventional minor league season. The last player to do so was Mike Leake, although Brandon Finnegan followed a similar arc when he was called by the Royals in September 2014 with just 27 minor league innings under his belt (also a mere three months after being drafted). Of course, the White Sox themselves have done this with a high-profile college lefty as well, rocketing Chris Sale to the big leagues in the same year that he was selected 13th overall (2010).

Crochet might not have the video game-esque numbers that many would expect to see from a top-ranked collegiate pitcher, but he was nevertheless regarded as one of the best prospects in the 2020 draft. Between his sophomore and shortened junior NCAA seasons, Crochet worked to a 3.82 ERA with an 87-to-22 K/BB ratio in 68 1/3 innings. Baseball America was most bullish on Crochet heading into the draft, ranking him as the No. 15 prospect in the class. Kiley McDaniel of ESPN (16th), the team at MLB.com (18th), Eric Longenhagen of FanGraphs (22nd) and Keith Law of The Athletic (39th) all had Crochet in their top 40 prospects as well.

There was some risk associated with Crochet after he missed the first three weeks of the 2020 season with what McDaniel tabbed as an issue with a muscle in his shoulder. He returned to make one appearance, punching out six hitters in 3 1/3 frames in what proved to be his only outing prior to the NCAA shutdown. Law calls him one of the best arms in the draft and labeled him a likely first-rounder, attributing the relatively bearish ranking to uncertainty surrounding his early absence. BA notes that there are concerns among some clubs about Crochet’s lack of track record as a starter — he started only 13 games in college while making 23 additional relief appearances — but virtually any scouting report on the 6’6″, 218-pound southpaw will say that he had some of the best pure stuff in the draft.

That arsenal, headlined by a fastball that runs up to 99 mph and a 70-grade slider, will be on full display at the game’s top level in the final week-plus of the season. It’s an aggressive move for a White Sox club that is clearly (forgive the cliche) all-in on pushing for a World Series in its first full, post-rebuild campaign.

The Sox have already clinched a postseason berth, and the Dodgers are the only team in baseball with a better record than their current mark of 33-17. They’ve ridden otherworldly performances from MVP candidates Tim Anderson and Jose Abreu to the top of the AL Central. With a formidable one-two punch of Lucas Giolito and Dallas Keuchel in the rotation, followed by promising young arms like Dane Dunning and Dylan Cease, they look like legitimate contenders for a deep postseason run as well.

Crochet figures to head to the bullpen, where he’ll give skipper Rick Renteria a power arm to mix into the late innings alongside Alex Colome, Matt Foster, Codi Heuer and, if he’s able to return by season’s end, fellow lefty Aaron Bummer. Crochet is no lock to make the postseason bullpen — he’ll need to earn his way into that role — but he makes an already loaded White Sox roster look all the more intriguing in the countdown to the team’s first postseason appearance since way back in 2008.