Marcus Stroman has announced on Twitter that he will accept the Mets’ qualifying offer. Metsmerized first reported that he planned to do so (Twitter link). By accepting, Stroman will return to Queens on a one-year deal worth $18.9MM. 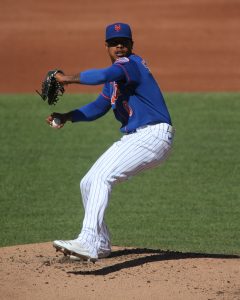 Stroman indicated that new owner Steve Cohen’s passion and commitment to winning played a role in his decision, writing: “After watching the presser, I’m beyond excited to play for you sir. I could feel the excitement and passion you’re going to bring daily. Let’s go be great!”

Stroman’s decision to accept the qualifying offer removes arguably the No. 2 free-agent starting pitcher from the market this winter. It’s of note that he’ll accept his QO as well, given that he and fellow QO recipient Kevin Gausman are both represented by agent Brodie Scoffield of Klutch Sports. Every pitcher is different, of course, and Scoffield has had the past 10 days to explore the different markets for both pitchers, but it still could offer a portent of what lies ahead for Gausman.

For the Mets, Stroman’s decision takes an immediate bite out of their 2021 payroll, but Stroman at one year and $18.9MM nonetheless represents a solid value for a club expecting to increase spending under its new owner. With Noah Syndergaard on the mend from Tommy John surgery and Steven Matz looking like a non-tender candidate, the Mets were thin on options beyond ace Jacob deGrom and impressive rookie David Peterson.

Stroman now gives the Mets a solid mid-rotation option with a strong track record to slot into the second or third spot in that rotation. He didn’t pitch in 2020 due to both a calf injury and an eventual season opt-out, but the longtime Blue Jays hurler has fared well in a hitter-friendly home park and division for the majority of his career.

From 2014-19, Stroman put together a 3.76 ERA and 3.64 FIP with averages of 7.4 strikeouts, 2.6 walks and 0.83 home runs per nine innings pitched. He’s one of the game’s foremost ground-ball pitchers, inducing grounders on 56.6 percent of balls put in play against him, which helps him to limit the long ball but is also cause for some concern given the Mets’ poor infield defense. Of course, returning president Sandy Alderson and whoever he hires to fill out his front office will have ample opportunity to put together a stronger defensive unit this winter should they choose.

Stroman joins deGrom ($33.5MM), Robinson Cano ($24MM), Jeurys Familia ($11MM), Dellin Betances ($6.8MM) and Brad Brach ($2.075MM) as the sixth player on a guaranteed contract currently on the books for the Mets. (The Mariners are paying $3.75MM of that Cano money, and $13.5MM of deGrom’s salary is deferred — although he’s also owed $10MM of a deferred signing bonus this coming January.)

Add in a notable arbitration class headlined by Syndergaard, Michael Conforto, Edwin Diaz, Brandon Nimmo, Dominic Smith and J.D. Davis among many others, and the Mets’ commitments could quickly jump north of $140MM. Still, that’s a pretty tepid number for a club whose owner just proclaimed: “…this is a major market team and it should have a budget commensurate with that.”

Cohen naturally added some caution, noting that his Mets will not spend “like drunken sailors,” but it’s clear that even with Stroman on board at a relatively premium rate, the Mets have plenty of room in the budget to continue adding pieces. That becomes all the more if Matz and other borderline arbitration candidates are cut loose, as is widely expected. Most in the industry expect the Mets to be in the mix for the market’s top free agent, with Citi Field being an oft-speculated landing spot for J.T. Realmuto and George Springer alike.