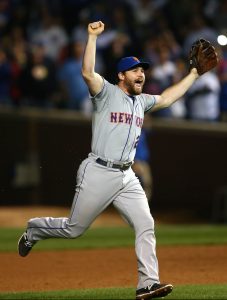 “This is a beautiful game, and I really just feel humbled and blessed that it let me jump on the ride for a little bit,” Murphy tells Martino. “It’s beautiful. It can teach you about so many things. And all I can say is, thank you.” Mets fans, in particular, will want to read Martino’s interview for dozens of quotes, stories and reflections on his time in New York, as well as additional thoughts from teammate and captain David Wright.

A 13th-round pick by the Mets back in 2006, Murphy made his MLB debut just two years later at the age of 23. He solidified a spot on the Mets’ roster with a strong showing in both 2008 and 2009, but a knee sprain late in Spring Training 2010 and a subsequent torn MCL suffered on a Triple-A rehab stint later that year wiped out his entire 2010 campaign.

Murphy returned to the field in 2011 and had his best year yet, hitting .320/.362/.448 in 423 trips to the plate. His offense over the next few years took a step back, but he settled in as an above-average contributor capable of seeing time at multiple positions. Late in the 2015 season, however, as the Mets were driving toward the postseason, Murphy took his game to new heights. He slugged 10 home runs after the All-Star break while hitting .285/.318/.500 through 280 trips to the plate, but he saved the best for a legendary postseason run that brought the Mets to the brink of a championship.

Thirty years old at the time, Murphy was a man on fire that October. He appeared in all 14 of the Mets’ games and posted a combined .328/.391/.724 batting line, belting seven home runs and a pair of doubles while scoring 13 runs and knocking in 11. Incredibly, Murphy homered in six consecutive playoff games during that Herculean performance — including a go-ahead, sixth inning shot of Zack Greinke in the decisive Game 5 of the NLDS and one in all four games of the Mets’ NLCS sweep of the Cubs. Wright tells Martino that Murphy’s 2015 postseason was “one of the most impressive things I ever witnessed on a baseball field.”

Murphy parlayed that brilliant postseason effort into a three-year deal with the Nationals, and while the club didn’t win its World Series until after he’d departed, that was through no fault of Murphy’s. He had his best season in 2016, his first year with the Nats, hitting .347/.390/.595 en route to a second-place finish in National League MVP voting. He hit .329/.380/.550 in his two and a half seasons with the Nats before being traded to the Cubs (and continuing to rake) — more than justifying the $37.5MM price of his contract.

From there, Murphy would sign a two-year deal to serve as the Rockies’ primary first baseman, but injuries took their toll during his time in Colorado. Murphy suffered a significant fracture in his finger after just two games, and though he was expected to miss at least a month at the time, he returned to the lineup just shy of four weeks later. Murphy swung a hot bat early on, but it seemed clear that the hand was bothering him; his hard-hit rate and exit velocities dropped precipitously that year, and his power wasn’t close to its peak levels despite playing his home games at Coors Field. Murphy posted a .279/.328/.452 line on the whole that year, and he followed it up with a .236/.275/.333 showing in 40 games in 2020’s shortened schedule.