TODAY: The Mets have officially announced Walker’s deal.  Noah Syndergaard has been placed on the 60-day injured list to open up a roster space for Walker.

FEB. 19, 8:14am: It’s a two-year, $20MM deal with a player option for a third season, Joel Sherman of the New York Post reports (Twitter links). The deal, which is still pending a physical, will pay Walker $10MM in 2021 and $7MM in 2022. The player option is at a base of $6MM and can rise to $8.5MM via escalator clauses based on Walker’s performance. There’s a $3MM buyout on the option, should Walker decline, making for a total of $20MM in guarantees.

7:04am: The Mets and free-agent right-hander Taijuan Walker have agreed to terms on a contract, tweets SNY’s Andy Martino. The Excel Sports client will step into the rotation alongside Jacob deGrom, Carlos Carrasco, Marcus Stroman and David Peterson. 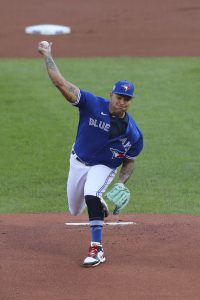 Heading into his age-28 season, Walker was the youngest established starter available in free agency. The former top prospect made his big league debut with the Mariners just two weeks after his 20th birthday back in 2013 and solidified his place in the Seattle rotation in 2015 at 22 years of age. The M’s traded Walker to the D-backs in a high-profile 2016 deal also including Ketel Marte, Jean Segura and Mitch Haniger, and he went on to have his best season in 2017: 157 1/3 innings of 3.49 ERA ball.

Walker went down with a torn ulnar collateral ligament in 2018, however, and the resulting Tommy John surgery wiped out nearly his entire season. He was on the comeback trail in 2019, but those efforts were derailed by a strained shoulder capsule that limited him to one inning. After pitching a combined 14 innings in 2018-19, Walker was non-tendered by the D-backs and returned to the Mariners on a low-cost, one-year deal in free agency.

The signing worked out well for the Mariners, who parlayed five solid starts from Walker into a deadline trade with the Blue Jays that netted outfield prospect Alberto Rodriguez (currently Seattle’s No. 24 prospect at Baseball America). Walker made six starts with the Blue Jays and pitched to a pristine 1.37 ERA with a 25-to-11 K/BB ratio over the life of 26 1/3 innings.

Overall, Walker’s 2.70 earned run average in 53 1/3 innings last year looked quite sound. However, despite that impressive mark, his age and his former top prospect pedigree, Walker appears to have had a difficult time finding a club willing to meet his asking price this winter. There’s likely some good reason for that, as once looking past the ERA, the numbers aren’t nearly as appealing.

On his way to that 2.70 ERA, Walker benefited from a .243 average on balls in play and a slightly elevated 78.5 percent strand rate. His 22.2 percent strikeout rate was below the league average, as was his 39.1 percent ground-ball rate. The righty’s 93.5 mph average heater was down from its 95.1 mph peak, and his swinging-strike rate was among the lowest in the league (13th percentile, per Statcast). Fielding-independent marks like SIERA (4.60) and Statcast’s xERA (4.87) aren’t as bullish on Walker, who averaged just 4 2/3 innings per start in 2020.

Add in the elbow and shoulder injuries in 2018-19, and some trepidation from interested teams is understandable — but only to an extent. We’ve seen the free-agent market regularly pay upwards of $10-12MM per year on mutli-year deals to fourth starter types, and Walker ought to be at least that moving forward. His prospect pedigree, youth, velocity and raw stuff give him the upside to become quite a bit more than that as well.

With the Mets, Walker needn’t perform like anything more than a fourth starter, thanks to the talent they already have atop their starting staff. Of course, if he does take a step forward and pitch closer to last year’s ERA marks, an already impressive rotation will only look all the more formidable. With the newest agreement in place, the Mets have an enviable quintet of deGrom, Carrasco, Stroman, Walker and Peterson. Beyond that looms the return of Noah Syndergaard, who’ll ideally be ready for a summer return following his own Tommy John surgery last May.

Unlike in 2020, that group is backed up by considerable depth. Joey Lucchesi, Jordan Yamamoto, Sean Reid-Foley and Sam McWilliams were added to the 40-man roster via trade and free agency this winter, and prospects Franklyn Kilome and Thomas Szapucki will be able to work toward minor league readiness in a game setting. The Mets also added lefty Mike Montgomery and righty Jerad Eickhoff on minor league deals, and it’s conceivable that they could yet bring in some additional non-roster depth in Spring Training.

While it may not be quite the offseason Mets fans envisioned, it’s hard to look at the current roster and consider the offseason anything other than a substantial step in the right direction. New York’s marquee acquisition of Francisco Lindor and Carrasco will go down as its largest strike of the offseason, with free-agent acquisitions of Walker, James McCann, Trevor May, Jonathan Villar, Kevin Pillar, Aaron Loup and Albert Almora have deepened the roster.

The Mets didn’t shatter the luxury tax threshold as many expected when Steve Cohen purchased the team — they’d have done so had their near-deal with Trevor Bauer been completed — but Walker’s deal pushes their baseline payroll and their luxury-tax ledger both just shy of $200MM. It’s a franchise record for Opening Day payroll by a magnitude of roughly $40MM, setting the tone for future offseasons under Cohen’s ownership.