Feb. 18: The Padres have announced the signing. Mike Clevinger was placed on the 60-day injured list to open a spot on the 40-man roster. Clevinger, of course, is expected to miss the 2021 season following Tommy John surgery.

Feb. 17: Melancon will be guaranteed $3MM on the deal, tweets MLB Network’s Jon Heyman. He’ll earn a $2MM salary in 2021, and there’s a $1MM buyout on a a mutual option for the 2022 season, Heyman adds. The contract allows Melancon to earn another $2MM via incentives.

Feb. 12: The Padres have agreed to a deal with free-agent reliever Mark Melancon, reports Dennis Lin of The Athletic (Twitter link). The deal with Melancon, an ISE Baseball client, will become official once he’s passed a physical. 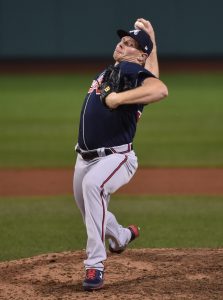 Melancon, 36 next month, adds a former All-Star closer to an already deep Friars bullpen. He’ll give skipper Jayce Tingler another option for ninth-inning work, joining Drew Pomeranz and Emilio Pagan as closer candidates in San Diego. Based on his recent work, Melancon could well jump to the front of the line as the favorite for saves.

Melancon just finished up the final season of a four-year, $62MM contract that briefly stood as the all-time record for a reliever. (Both Aroldis Chapman and Kenley Jansen topped that mark within weeks of Melancon signing.) The deal didn’t exactly pay dividends for the Giants, as Melancon battled injuries in both 2017 and 2018, but he bounced back with a strong showing in 2019 and was quite strong over the past season-plus following a trade to the Braves.

Melancon pitched 43 2/3 innings with Atlanta, racking up 22 saves while posting strong strikeout and walk percentages (26.3 percent and 6.2 percent, respectively). He’s also one of the game’s leading ground-ball pitchers, evidenced by a whopping 61.4 percent mark over the past two years.

Despite the success in Atlanta, there are some red flags surrounding Melancon. In addition to the fact that he’ll pitch all of 2021 at age 36, last year’s 91.7 mph average fastball represented the second-lowest mark of his career while his 8.7 percent swinging-strike rate was a career-low. He still excelled at inducing weak contact and ought to benefit from a generally strong defensive infield defense, though.

The Friars already had not only a crowded but also relatively immobile bullpen (from a roster flexibility standpoint). None of Pomeranz, Austin Adams, Pierce Johnson, Dan Altavilla, Craig Stammen or Javy Guerra can be optioned to the minors. Pagan has options but surely isn’t in danger of being sent down, and Tim Hill (who also has options) is one of the team’s three lefties. It could be tough for the Padres to continue carrying the out-of-options Guerra, a converted shortstop who has yet to find much success in Triple-A or the Majors, but they may not want to give up on him considering his heater averages better than 98 mph.

Those, of course, are the types of decisions that playoff-caliber clubs are forced to make when adding improvements, and the Padres have solidified themselves as just that. After making the postseason for the first time under newly promoted president of baseball operations A.J. Preller in 2020, the Padres have added the likes of Yu Darvish, Blake Snell, Joe Musgrove and KBO superstar Ha-Seong Kim this winter while also re-signing Jurickson Profar. Melancon is the latest, and perhaps the final, piece of an active offseason that has deepened an already-talented team which looks increasingly capable of giving the World Champion Dodgers a run for their money in the NL West.