Feb. 10: The Phillies have formally announced their new two-year deal with Gregorius.

Jan. 30: The Phillies are in agreement on a two-year deal with shortstop Didi Gregorius, reports Jayson Stark of the Athletic (Twitter link). It’s a $28MM guarantee, adds the Athletic’s Ken Rosenthal. The deal contains deferrals, per Bob Nightengale of USA Today (via Twitter). 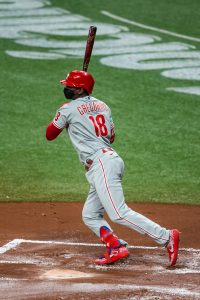 Gregorius returns to Philadelphia after originally joining the Phils on a one-year contract last winter. That marked a prove-it deal of sorts after Gregorius struggled in 2019, and the veteran shortstop made good on the opportunity. He started 56 of the team’s 60 games at shortstop and hit a strong .284/.339/.488 with ten home runs over 237 plate appearances.

Given how well he performed in 2020, it makes sense the Phillies were happy to keep Gregorius in the fold. His return allows the club to leave Jean Segura at second base, where he played last season. That also keeps the Phils from having to pencil Scott Kingery into an everyday role after he struggled through a brutal 2020. Corner infielders Rhys Hoskins and Alec Bohm can now flank the Gregorius-Segura pairing on the dirt on most days.

Gregorius was often grouped with Marcus Semien and Andrelton Simmons at the top of this winter’s free agent market for established big league shortstops. All three agreed to terms this week, with Gregorius finding the most lucrative guarantee. Semien and Simmons each signed one-year deals (although Semien’s $18MM beats Gregorius’ $14MM average annual value), while Gregorius received a multi-year arrangement. However, his $28MM total figure comes in south of the MLBTR staff’s projection of $39MM over three years entering the offseason.

That could reflect teams’ trepidation over Gregorius’ batted ball metrics. His 83.8MPH average exit velocity last season ranked in the second percentile league-wide. He was near the bottom of the league in hard contact rate and barrel rate as well. Gregorius has never been one to hit the ball particularly hard, although his average exit velocity was closer to league average over his final two seasons with the Yankees.

Of course, Gregorius has found plenty of success despite those underwhelming contact quality metrics. He has been an above-average hitter in three of the past four seasons, with 2019, in which he made a midseason return from Tommy John surgery, standing as his lone down year. Gregorius puts the ball in play at an elite rate, leading to decent batting averages. He’s also established a knack for hitting the ball in the air to right field, enabling him to hit for a solid amount of power in games despite lacking huge raw strength and physicality.

On the other side of the ball, Gregorius has gotten mixed reviews from defensive metrics. Ultimate Zone Rating has long rated him as a roughly average shortstop, while Defensive Runs Saved has soured a bit on him recently. Statcast’s Outs Above Average metric, meanwhile, has pegged Gregorius as a below-average defender every year since being introduced in 2017. Over a two-year term, the 30-year-old (31 in February) shouldn’t have any problem sticking at the position, even if he’s no longer the defender he was earlier in his career.

The Phillies have managed to keep both of their top potential free agent departures, signing Gregorius a week after bringing back catcher J.T. Realmuto on a five-year deal. The Phils’ payroll now sits at an estimated $187MM, per Roster Resource, right in line with last season’s $185MM mark prior to proration (although the yet-undisclosed deferrals on Gregorius’ deal could drive that present figure down somewhat). The organization’s estimated $195.3MM in luxury obligations leaves a little less than $15MM for further additions if ownership is willing to spend up to the first tax threshold. Even after signing Matt Moore, Philadelphia could stand to add to the pitching staff if they hope to keep pace in a talented NL East.

From a broader market perspective, the Gregorius signing removes the last obvious everyday caliber shortstop from free agency. Teams without a clear option there, the Reds and Athletics among them, may now be left turning to the trade market to solidify the position.