Feb. 9: Archer has passed his physical, and the deal is official, tweets Marc Topkin of the Tampa Bay Times. A formal announcement and a (re)introductory Zoom call will both come later today. The team won’t need to make an additional 40-man move to create roster space after trading Aaron Slegers to the Angels last night.

Feb. 2: Free-agent right-hander Chris Archer is returning to the Rays, Ken Rosenthal of The Athletic reports. It’s a one-year, $6.5MM contract, per Jeff Passan of ESPN. The deal is pending a physical. Archer is a client of VC Sports Group. 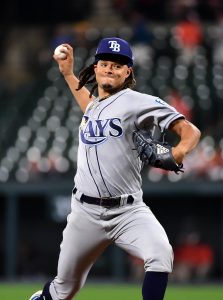 A 2006 fifth-round pick who opened his career with the Indians and Cubs organizations, Archer first joined the Rays in a significant trade with Chicago in January 2011. Archer was a highly regarded prospect at the time who wound up matching the hype in Tampa Bay, where he debuted in 2012 and was an eminently valuable member of its rotation for several years. Through 2018, the last year of his initial run with the franchise, Archer posted a 3.69 ERA/3.52 SIERA with a 25.8 percent strikeout rate and a 7.7 percent walk rate in 1,063 innings and 177 starts.

Despite the success Archer enjoyed as a Ray, the club decided to move on from him when his team control was dwindling before the 2018 trade deadline. That proved to be another brilliant trade by the Rays, who received two righties – Tyler Glasnow and Shane Baz – as well as outfielder Austin Meadows from the Pirates in exchange for Archer. Glasnow and Meadows have since turned into major league building blocks for the Rays, while FanGraphs’ Eric Longenhagen ranked Baz as their seventh-best prospect in a deep farm system last month.

The Archer trade was a disaster for Pittsburgh, meanwhile, as it lost three quality pieces for a player who disappointed in its uniform. The Pirates encouraged Archer to lean on his sinker, which did not work, as Steve Adams of MLBTR noted last offseason. Archer’s production dipped in the wake of the trade and got fell even more in 2019, when he registered career worsts in ERA (5.19), SIERA (4.38) and home run-to-fly ball percentage (20.2) in 119 2/3 innings. The hope was that Archer would bounce back last year, but he instead missed the season after undergoing thoracic outlet syndrome surgery in June. The Pirates then declined his $11MM club option for 2021 in favor of a $250K buyout.

Considering Archer’s recent performance and the severity of his procedure, the Rays are taking a big risk that he will return to being a viable starter. But it does look like a coup for the reigning American League champions that they’ve now reunited with the player they received such a massive return for just a couple of years ago. If healthy, the 32-year-old Archer may be able to help replace Blake Snell and Charlie Morton, whom the Rays’ rotation has lost since last season ended. He’s the second reclamation project the Rays’ starting staff has taken on in free agency, joining $3MM signing Michael Wacha.