The Orioles have made a late addition to their infield via free agency, signing former Phillies and Royals third baseman Maikel Franco to a one-year, Major League contract. The O’s announced the move at the top of the hour, placing right-hander Hunter Harvey on the 60-day injured list with an oblique strain in order to open a spot on the 40-man roster. Franco, a client of Mato Sports Management, will reportedly earn $800K in guaranteed money with another $200K available via incentives and a trade assignment bonus being factored into the deal as well. 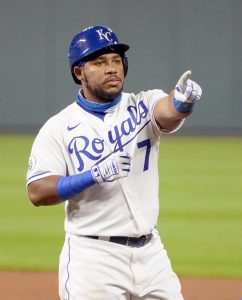 Franco makes a logical roster fit for the O’s, who had been otherwise slated to turn to Rio Ruiz at the hot corner. The 27-year-old Ruiz has just a .229/.299/.393 line across 617 plate appearances (84 wRC+) over the past two seasons. He has shown roughly league-average power (21 home runs, .164 ISO), but his on-base deficiencies and slightly below-average defensive ratings at third have left him hovering just above replacement level overall.

It’s reasonable to expect Franco to offer an upgrade on that production. The former Phillies top prospect showed flashes of promise in Philadelphia but never amounted to expectations. After being cut loose by the Phils, though, Franco posted a decent season with the Royals in 2020. He played in all sixty of Kansas City’s games (starting 51) and hit .278/.321/.457. As with Ruiz, low walk rates and batting averages on balls in play have led to on-base deficiencies. Franco, though, strikes out less often and has hit for more power than Ruiz.

Franco will be rather behind schedule at this point, so he may not be ready to step into the lineup on Opening Day. The two sides seemingly prepared for that reality, as MLB Network’s Jon Heyman indicated at the time of the agreement that Franco consented to being optioned to the Orioles’ alternate site early in the season, if need be, in order to continue ramping up. As a player with five-plus years of MLB service time, Franco can only be optioned to the minors with his approval.

Even amidst a full rebuild, there’s value for the Orioles in making improvements at the margins of the roster. Barring an unexpected breakout in 2021, it’d be hard to imagine Franco commanding a huge trade return. Still, should he sign, Franco would be a viable candidate to be flipped for something of future value at the deadline. Non-tendered by the Royals last fall, he’d surely come at a low cost.

Franco’s modest guarantee will have minimal impact on an already minuscule Orioles payroll. He’s promised a bit less than $300K more than the league minimum, pushing Baltimore’s payroll just beyond the $60MM mark, per Roster Resource’s Jason Martinez. Franco joins shortstop Freddy Galvis (one year, $1.5MM) as Baltimore’s only major league free agent signees of the winter. It’s always possible the O’s could make another addition or two, particularly as veterans continue to opt out of minor league deals elsewhere around the league, but there’s no indication at this time that anything further is in the works.

As for Harvey, today’s IL placement is the latest setback for the now-26-year-old former top prospect. Baltimore tabbed Harvey with the No. 22 overall pick back in 2013, and he was at one point widely regarded as one of the game’s premier pitching prospects. Injuries have decimated his career to this point, and the O’s moved him to the bullpen in 2019, hoping the reduced innings total would help to keep him healthier. He’s pitched 15 innings out of the ’pen over the past two seasons, working to a 3.00 ERA with 17 strikeouts against six walks.

Harvey had been expected to be in the ninth-inning mix for the O’s in 2021, but that won’t be the case — at least not early in the year. The 60-day IL placement can only be backdated to three days prior to Opening Day, meaning he’ll miss at least the first 57 days of the upcoming season. Harvey could technically return by late May, then, but there’s no timetable for his return at the moment.

MLB Network’s Jon Heyman first reported that the two sides were in talks. MASNsports.com’s Roch Kubatko added that the Orioles had put a formal offer on the table. Heyman then reported the agreement and the terms.