The Brewers are finalizing a deal to acquire lefty reliever Daniel Norris from the Tigers, tweet Jeff Passan and Kiley McDaniel of ESPN.  MLB.com’s Jason Beck first broke news of the trade discussions, and he hears that minor league starter Reese Olson is heading back to the Tigers.  The deal is done, according to Evan Petzold of the Detroit Free Press. 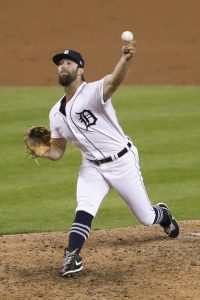 Norris was drafted in the second round by the Blue Jays back in 2011.  He was the key piece in the Jays’ acquisition of David Price in a deadline deal of six years ago, along with Matthew Boyd.  Back then, Norris was a 60-grade prospect with the potential of a frontline starter.  However, Norris battled numerous injuries in his Tigers career.  He made a career-high 29 starts in 2019, but switched to the bullpen permanently last August when Tarik Skubal and Casey Mize hit the scene.  Though Norris has mostly pitched in low-leverage situations for the Tigers this year, he did work his way up in the bullpen pecking order in July.

This month the Brewers have been relying on Josh Hader and Devin Williams in high leverage situations, with Williams activated from the IL for elbow discomfort on Tuesday.  In addition to Hader, the Brewers’ pen includes lefty Brent Suter.