The Mariners announced Wednesday that they’ve promoted general manager Jerry Dipoto to president of baseball operations and signed him to a multi-year contract extension. The club has also announced a multi-year extension for manager Scott Servais. The length of the contracts were not specified. 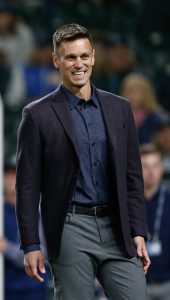 “Jerry is a creative, passionate leader with a clear vision for our franchise,” managing partner John Stanton said in today’s press release. “Following the 2018 season, Jerry came to us with a plan for how to compete for and win championships. He was transparent on the difficulty, but also clear on the goals and milestones. In the two-and-a-half years since, he has led the baseball operations group through challenges on and off the field, while executing on the timeline he laid out.”

Stanton points out that the Mariners’ 91-76 record since the midpoint of last season ranks sixth in baseball, praises the “first-class operations and analytics team” built by Dipoto, and expresses pride in a farm system that recently topped Baseball America’s midseason rankings. The Mariners are also just three and a half games back in the American League Wild Card race, outperforming broad expectations in what most expected to be another rebuilding season.

Mariners ownership brought Dipoto aboard in the midst of a win-now push. At the time, Dipoto was stepping into an organization that had a bloated long-term payroll and one of the game’s worst-ranked farm systems. Seattle posted winning records in two of Dipoto’s first three seasons (2016 and 2018) but did not reach the playoffs. With several aging veterans and little help on the immediate horizon, Dipoto set out to “reimagine” the Mariners’ roster and farm system following an 89-win 2018 season.

Over the next two seasons, he traded away the likes of Robinson Cano, Edwin Diaz, James Paxton, Jean Segura, Austin Nola and many others as he sought to replenish the minor league system and bring about a youth movement. His efforts continued all the way through the current deadline, when Dipoto somewhat controversially traded closer Kendall Graveman to his chief division rival for five years of control over young infielder Abraham Toro. (Toro hit a grand slam off Graveman last night.)

That youth movement has begun to arrive in Seattle, led by names such as Toro, Ty France, J.P. Crawford, Luis Torrens and others. Some of Dipoto’s early acquisitions, such as Mitch Haniger and Marco Gonzales, have become mainstays on the roster and played key roles in the team’s emergence. Free-agent additions such as Chris Flexen and Yusei Kikuchi have been vital to the team’s 2021 rotation.

A new multi-year extension gives Dipoto the opportunity to see a rebuild he initially pushed for all the way through to its culmination. While the Mariners have begun to see some of the fruits of those rebuilding efforts, the club hopes there’s more on the horizon not just via the young big leaguers who’ve struggled (e.g. Jarred Kelenic) but also the numerous top prospects still on the farm. Outfielder Julio Rodriguez, right-handers Emerson Hancock and George Kirby and infielder Noelvi Marte, among others, could all reach the Majors by 2023 — many of them as soon as next season.

The rebuilding effort has also left Seattle with a squeaky-clean payroll outlook. The Mariners have just $19MM committed to next year’s payroll (before arbitration raises and decisions on options for Kyle Seager and Kikuchi). They’ll take that minimal level of financial commitment to a free-agent market that is deeper in talent than any we’ve seen in recent memory and look to augment the young core with some veterans to take the team to a new level in 2022 and beyond.

The sheer volume of trades made by Dipoto, who has more than earned his “Trader Jerry” nickname since taking the reins in Seattle, opens him up to some criticism and has created his share of detractors. However, it’s tough to argue that the team’s farm system, payroll outlook and current big league roster paint anything other than a bright future that is largely because of its current baseball operations leader’s doing. 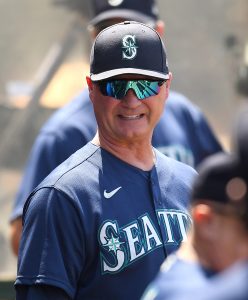 Servais, like Dipoto, is in his sixth season with the Mariners. He’d worked as an assistant general manager in the Angels front office during Dipoto’s time as GM there, setting up a strong foundation for the two to build upon in Seattle.

“Scott has done a terrific job in defining our team’s culture as one that is driven by process, hard work and heart,” Dipoto said in a press release announcing Servais’ new contract. “That has allowed us to bring young, talented players to the Majors over the past three years and see them adjust and succeed as we build towards a team that competes for championships on an annual basis. The resiliency our club has shown in overcoming challenges on, and off, the field over the past two years have been a direct result of Scott’s leadership of the team and coaching staff.”

The Mariners are the only club Servais has ever managed, and through his six seasons he holds a 419-422 record. That’s skewed largely by a 68-94 record in 2019 — the first season of the club’s rebuild. Servais has a pair of winning seasons on his record and ought to add a third to the ledger in 2021, barring a seismic September collapse.

The larger question isn’t whether the Mariners will finish the current season with a winning record but rather whether they’ll be able to close a 3.5-game Wild Card deficit, thereby snapping a two-decade playoff drought. Even if a return to the postseason doesn’t happen in 2021, it would surely be viewed as a disappointment among fans, the players, the front office and ownership if a return to the playoffs doesn’t come to fruition over the life of these new contracts for Dipoto and Servais. Their ability to push this club from a young, up-and-coming club on the rise to bona fide postseason contenders will determine whether future extensions are in order.