The San Diego Padres and Seattle Mariners have agreed to a three-player trade. The Padres will send All-Star second baseman Adam Frazier to Seattle for left-handed reliever Ray Kerr and outfielder Corey Rosier, reports ESPN’s Jeff Passan (via Twitter). Both teams have announced the deal, making it official.

Frazier certainly fits the mold of the type of offensive contributor that GM Jerry Dipoto tends to covet. Case and point, the Mariners were said to be interested in Frazier at the trade deadline before he ultimately landed in San Diego.

The soon-to-be 30-year-old is a contact-first bat and well-rounded player who can cover second base on a regular basis or move to the outfield. Though his defensive versatility is a plus, his bat plays best if he’s manning the keystone. Right now, that’s where he is most likely to get the bulk of his playing time. He will share the middle infield with J.P. Crawford, while Abraham Toro and Ty France fill out the infield as Dylan Moore moves into a super utility role.

Frazier was an All-Star last season with the Pirates before slowing down in San Diego. Still, he posted 4.0 rWAR and an overall slash line of .305/.368/.411 over 639 plate appearances between the Pirates and Padres. Frazier is projected to make around $7.2MM in arbitration in what will be his final season before free agency, so he rates as a relatively low-risk, low-cost acquisition for the Mariners. 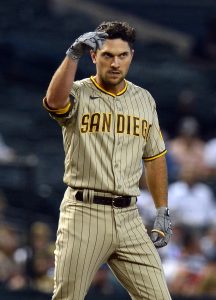 While a solid contributor, it would be difficult to rank him as a true “difference-maker.” His lack of pop (.131 career ISO) makes him more of a line mover than a run creator, though he will lengthen the Mariners’ lineup and make life difficult on opposing pitchers by putting the ball in play and vying for a high batting average.

Truth be told, he’s a fairly similar player in form and function to his new double play partner in Crawford: sure-handed defenders, light on power and patience, who run well and excel at putting bat-to-ball. Don’t be surprised to see Frazier near the top of the Mariners’ batting order on a regular basis, regardless of where they put his glove.

In terms of his approach, Frazier walked in just 7.5 percent of his plate appearances, below the league-average 8.5 percent walk rate. At the same time, he struck out in a mere 10.8 percent of his plate appearances, a much stronger rate than the 22.3 percent league average. In short, Frazier puts pressure on defenses, while minimizing mistakes on the other end. He’s a quality contributor and the type of player that will give manager Scott Servais plenty of options on both ends.

In exchange for one season of Frazier, the Mariners are sending a hard-throwing southpaw reliever in Kerr and a young outfielder in Rosier. Neither have appeared on prospect lists, though Kerr did appear in Fangraphs’ supplemental “Arm Strength Relief Sorts” section. Wrote Fangraphs, “Kerr is a late-bloomer who came into big velo ahead of the pandemic. He can dunk a basketball and has superlative weight room exploits as well as rare lefty velo, inconsistently up to 99. His splitter flashes plus and the Mariners have worked with his slider enough to create viable sweep on the pitch but it was a 30 the last I saw it. The strike-throwing and secondary consistency are present issues, too.”

At 27 years old without a Major League appearance, Kerr could be considered a non-prospect, though his ability to hit triple-digits on the radar gun provides some intrigue as a potential power arm out of the bullpen. He was signed as a non-drafted free agent back in 2017, beginning his career as a two-way player, though he has focused on pitching in recent years. The athletic ability is clearly there, the question being whether it can be channeled to turn him from a “thrower” to a “pitcher,” as the saying goes.

Last season, Kerr tossed 39 2/3 innings across 36 appearances in Double-A and Triple-A with a combined 3.18 ERA, inspiring 36.8 percent strikeout rate, and 9.8 percent walk rate. For a Padres team that’s prioritizing pitching depth this offseason, Kerr is a solid gamble to add to the 40-man roster.

Rosier, 22, was a 12th round pick in last year’s amateur draft, signing for a $125K bonus. The Maryland native played his college ball at UNC Greensboro, and he was the #249th ranked prospect in the draft, per Baseball America. He played most of last season in Low-A Modesto, slashing an impressive .390/.461/.585 in 141 plate appearances. He projects as an extra outfielder with the ability to play centerfield. At the plate, his limited power is his biggest shortcoming.

Kerr and Rosier aren’t prospects at the level of  Tucupita Marcano, Jack Suwinski, and Michell Miliano, the prospect San Diego sent to Pittsburgh to acquire Frazier at the deadline. That said, there’s no reason to think they’d get back fair value. Kerr fits a need and Rosier helps backfill the farm system at a lower level.

The more motivating factor in this deal for San Diego is financial. Frazier’s deal wasn’t exorbitant, but for a team with limited payroll flexibility, clearing Frazier’s deal from the payroll helps. With Jake Cronenworth, Ha-Seong Kim and Jurickson Profar all under contract, the Padres are set with second base/utility types, where Frazier best profiles. With the financial savings, President of Baseball Ops A.J. Preller can look to re-invest into the pitching staff or in finding an impact bat for an outfield corner.