After months of back-and-forth, the Marlins and right-hander Sandy Alcantara have agreed upon a long-term deal. The team announced Tuesday they’ve signed the CAA Sports client to a five-year contract extension that also contains a club option covering the 2027 season. Alcantara will reportedly be guaranteed $56MM, including a $2MM buyout on the 2027 option valued at $21MM. He receives a $1.5MM signing bonus as part of the deal. 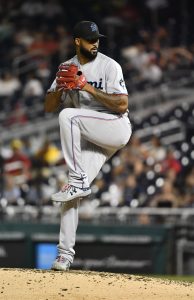 Alcantara, 26, has been in extension talks at least dating back to July, when reports of negotiations first surfaced. While the Marlins’ first overtures were said to be low enough that Alcantara’s camp considered them a nonstarter, a $55MM+ guarantee would be a record extension for a pitcher with between three and four years of Major League service time, topping the previous highwater mark set by Carlos Martinez in Feb. 2017 (five years, $51MM).

Acquired from the Cardinals alongside Zac Gallen in the 2017 trade that sent Marcell Ozuna to St. Louis, Alcantara has steadily improved over the course of his four seasons in Miami. He’s always been a hard-throwing sinker specialist, but his strikeout and walk rates early in his career were pedestrian, to say the least. Alcantara racked up 197 innings with the Fish in 2019, but he looked more like a potential innings-eater than a star at that point. Fast forward to 2021, however, and Alcantara looks more like a building block than that stable No. 4 starter he was in ’19.

This past season, Alcantara finished fourth in MLB with 205 2/3 innings thrown, averaged 98.1 mph on his heater and posted career-best marks in strikeout rate (24.0%), walk rate (6.0%) and ground-ball rate (55.3%). All three are vastly better than the league average, so it’s little surprise that Alcantara’s 3.19 ERA was largely supported by fielding-independent marks. This year’s 13.3% swinging-strike rate was easily a career-high, and Alcantara’s gaudy 36.7% opponents’ chase rate on pitches outside the strike zone ranked third among qualified starters. Alcantara also thrives when it comes to inducing weak contact and ranks above the league average in Statcast’s “expected” ERA, batting average, slugging percentage and wOBA.

Alcantara had been set for his first trip through the arbitration process this winter and was projected by MLBTR contributor Matt Swartz to earn $4.5MM. He’d have been arb-eligible twice more, securing a pair of additional raises in the process. The proposed deal would buy out two arbitration seasons and, depending on how bullishly one cares to project Alcantara’s would-be raises in years two and three of arbitration, places a value of around $14-15MM per season on those two free-agent campaigns. That, of course, still represents a bargain for Alcantara if he can replicate his 2021 breakout, but that type of tradeoff is commonplace for players signing extensions well before they’d otherwise reach the open market.

The $11MM annual value — a figure which, as with many extensions, is skewed by the arbitration seasons included in the deal — is significant for a typically low-payroll Marlins club. However, Miami doesn’t have a single guaranteed contract on the books after the 2023 season, and second-year GM Kim Ng has been vocal in her desire to spend more money this offseason. Much of that is expected to come via free agency, but locking up one of their current stars to keep him in the fold beyond his previously allotted team control certainly speaks to that increased financial wherewithal as well.

Miami has reportedly considered trading from its impressive collection of young starting pitchers as the organization eyes long-term options both in the outfield and behind the plate. That said, Alcantara would always have been one of the toughest Marlins starters to obtain — if not the toughest — and a five-year extension would further diminish the already slim chances of him being dealt. The Fish could still dangle any combination of Pablo Lopez, Elieser Hernandez and Jesus Luzardo, while near-MLB prospects like Max Meyer and Edward Cabrera (among many others) would surely carry very strong trade value. Injured youngsters like Sixto Sanchez (shoulder capsule surgery) and Jake Eder (Tommy John surgery) are appealing in their own right — health concerns notwithstanding.

With such a bounty of young arms, the Marlins obviously could have weathered the hit of trading Alcantara, but today’s extension instead likely portends a long-term rotation headed by Alcantara and 2021 NL Rookie of the Year runner-up Trevor Rogers. Who’ll fill the spots behind that dynamic pairing is dependent on how the offseason trade market unfolds, but the Fish are well-positioned to continue making strides thanks largely to that near-unparalleled collection of pitching talent.

Craig Mish of SportsGrid first reported the Marlins and Alcantara were both nearing agreement and had agreed upon on a five-year extension worth more than $56MM. Mish and Jordan McPherson of the Miami Herald reported the presence of a sixth-year club option valued at $21MM, as well as the $1.5MM signing bonus.