Albert Pujols’ career has come full-circle, as the Cardinals announced Monday afternoon they’d agreed to a deal to bring him back to St. Louis. The MVP Sports Group client will reportedly be guaranteed $2.5MM. St. Louis will announce a corresponding 40-man roster move later this week. 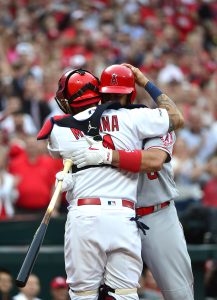 Pujols, 42, spent the first 11 years of his career with the Cardinals, playing at an unfathomable level and enshrining himself as a future Hall of Famer. In that time, he hit 445 home runs and put up an incredible .328/.420/.617 for a wRC+ of 167. He was a key reason why the club was a continual competitor in that time, making the postseason in 7 of those 11 seasons and winning the World Series in 2006 and 2011.

Based on that otherworldly run of success, he was signed by the Angels to a ten-year, $254MM deal covering the 2012-2021 seasons. Pujols continued to hit at a level above the league average for the first five years of that deal, though a few notches below what he did as a Cardinal. From there, things only got worse, as he hit just .242/.291/.406 from 2017 to 2020, producing a wRC+ of just 84. After 24 games last year, with just a few months remaining on the contract, the Angels released him. Surprisingly, he was picked up by the Dodgers, who planned to limit the veteran slugger to a bench/platoon role, primarily facing lefties. The strategy worked out fine enough, as Pujols hit .254/.299/.460 as a Dodger, a wRC+ of 101.

The earlier report from Katie Woo of The Athletic indicated that the club was interested in bringing Pujols back for a reunion, but in a similar role to the one he had with the Dodgers last year. Now that the National League will have the designated hitter this year, it will be easier for the club to implement Pujols in this way, being used as a pinch hitter or in the DH slot, trying to limit his exposure to righties. Woo noted that that the club has traditionally shied away from platoon strategies in the past, but that new manager Oliver Marmol is planning on changing that. Paul Goldschmidt is firmly entrenched as the club’s regular first baseman, meaning Pujols will be in the mix for DH/pinch-hitting duties alongside Corey Dickerson, Lars Nootbaar and Juan Yepez.

For Yepez, he seemed poised to make the team after a tremendous year in the minors. Between Double-A and Triple-A last year, he hit .286/.383/.586, for a wRC+ of 154. Then there’s Nolan Gorman, who also spent last year between Double-A and Triple-A, hitting .279/.333/.481, wRC+ of 115. However, Woo reports that, given that Yepez is just 24 and Gorman doesn’t turn 22 until May, the club is considering a plan wherein they each spend a bit more time in the minors getting regular reps, waiting for an opportunity to open up as the season progresses.

While Yepez and Gorman will surely get their opportunities down the line, the narrative of the moment is that one of this generation’s greatest hitters is returning to where he started his career and flourished. He will also reunite with Yadier Molina and Adam Wainwright, long-time Cardinals who were alongside Pujols for his greatest seasons, including those two World Series championships.

Derrick Goold of the St. Louis Post-Dispatch reported Pujols and the Cardinals were finalizing a one-year deal. Katie Woo of the Athletic had first reported there was “growing interest” in the organization in bringing him back. Mark Feinsand of MLB.com reported the sides were in agreement on a one-year, $2.5MM deal.