March 17: The Cubs have reached an agreement with free-agent infielder Jonathan Villar, reports Robert Murray of Fansided. The ACES client’s contract is pending the completion of a physical. Villar’s deal with the Cubs is worth $6MM, tweets MLB Network’s Jon Heyman. The one-year deal also includes a mutual option for the 2023 season and performance incentives that can boost that $6MM base, tweets MLB.com’s Mark Feinsand. 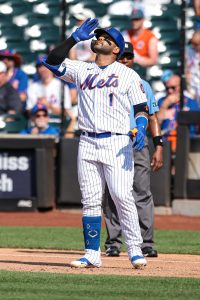 Unfortunately for Villar, that pair of above-average seasons at the plate bookended a disastrous 2020 showing that has hampered his earning power in free agency to some extent. Splitting the 2020 campaign between Miami and Toronto, Villar posted a combined .232/.301/.292 line through 207 trips to the plate. Small sample or not, that marked the least-productive year of what is now a nine-year career as a big leaguer — and it came on the cusp of Villar’s first venture into free-agent waters.

The Cubs’ infield picture is largely up in the air at the moment, so it’s not yet clear just where Villar will slot in. He’s capable of playing second base, third base and shortstop, though he’s better suited for the former two positions than the latter. The Cubs are hopeful that former No. 4 overall pick Nick Madrigal, acquired from the White Sox for Craig Kimbrel at last year’s trade deadline, will be able to step up as their everyday second baseman. Madrigal, however, is recovering from surgery to repair a full tear of his hamstring last year, so it’s not a given that he’ll hit the ground running.

At third base, the Cubs currently look like they’ll rely primarily on journeyman Patrick Wisdom. Although Wisdom came out of nowhere to smash 28 home runs last season and post a .231/.305/.518 (115 wRC+) batting line as a rookie, he did so while striking out in a staggering 40.8% of his plate appearances. He can’t be counted upon to repeat last year’s surprising power display if he’s going to continue striking out at a near-41% pace, and Villar will give Chicago some cover at the hot corner if Wisdom takes a step back.

Looking to shortstop, the Cubs will hand things over to veteran Andrelton Simmons. The longtime Braves and Angels defensive standout struggled through an awful year at the plate in his lone season with the Twins last year (.223/.283./274) but remains one of the sport’s best gloves. He’ll probably log the lion’s share of innings at shortstop as he searches for a rebound to prior levels of offense.

Villar can back up any of the three positions, and the Cubs still have former first-round pick Nico Hoerner as an option to fill in around the infield as well. Hoerner, much like Madrigal has virtually no power but possesses excellent bat-to-ball skills and a sharp eye at the plate (14.7% strikeout rate, 10% walk rate in 2021). Each of Madrigal, Simmons, Wisdom and Hoerner hits right-handed, so Villar’s switch-hitting bat gives manager David Ross some more flexibility and additional matchup options.