The Reds and Twins are in agreement on a deal headlined by right-hander Sonny Gray, moving from Cincinnati to Minnesota, per Bobby Nightengale of the Cincinnati Enquirer (via Twitter). Along with Gray, the Twins will receive minor league right-hander Francis Peguero. In return, the Reds will acquire the 26th overall selection of the 2021 draft, right-hander Chase Petty. Both teams have announced the deal, making it official.

This deal has the potential to shake up both central divisions. The Twins, for their part, look much improved with the addition of Gray, and they might not be done adding starters, per MLB Network’s Jon Heyman (via Twitter). With Kenta Maeda out after undergoing Tommy John surgery, the rotation was easily the Twins’ biggest area of need moving forward.

Although the Twins bottomed out last year, which led to the sell-off of a number of high-profile names, much of the talent that took them to the playoffs in 2019 and 2020 remains. Gray represents a pseudo replacement for the biggest departure, Jose Berrios, who was traded to the Blue Jays in July. Though Berrios was a homegrown star – and he’s four and a half years younger than Gray – in the short term, the 32-year-old Gray is certainly capable of holding the line in what was once Berrios’ rotation spot.

Twins president of baseball operations Derek Falvey praised Gray for a makeup that’s “off the charts,” mentioning his ability to “anchor the rotation” and set an example for younger starters, per this video clip from Phil Miller of the Star Tribune. The player, the personality, and the two years of team control made Gray a natural target for this Twins’ squad. 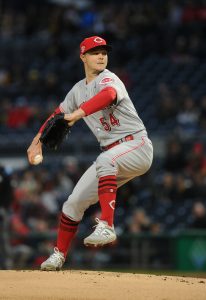 Berrios is the broader talent of the two, but one could argue that Gray is a better fit for this particular Twins roster because of the versatility his contract affords them. Despite a $1MM bump to his contract because of the trade, tweets Nightengale, Gray’s 2022 salary still clocks in at a mere $10.7MM. Furthermore, the Twins now hold an affordable $13MM club option for 2023. That’s plenty economical for a rotation arm coming off a 3.3 rWAR/2.4 fWAR output over 135 1/3 innings spanning 26 starts.

Given the contract, the Twins can flip Gray again if they crater as they did in 2021, but if the club proves to be more competitive, Gray figures to be one of the reasons why. His strikeout numbers were down a touch from his career norms, down to a still-solid 27.0 percent strikeout rate, but his walk rate also improved to 8.7 percent, and there’s little reason to think he can’t continue to be a solid mid-to-front-end arm.

Gray should be helped by moving from the Reds’ uneven defense to a fairly well-equipped defensive unit in Minnesota. If Byron Buxton stays healthy, and Josh Donaldson can avoid an age-related decline at third, the Twins ought to catch their share of baseballs, especially with Isiah Kiner-Falefa taking over at short.

In terms of the wider impact on Minnesota’s roster, the rotation doesn’t have much else in the way of sure things. Randy Dobnak was signed to a low-risk, long-term contract last winter, but the 27-year-old struggled mightily in 2021 and didn’t end up spending much time in the rotation. Dylan Bundy had a similar kind of year for the Angels. The 29-year-old has a longer track record, but no less uncertainty. Joe Ryan, are Bailey Ober are likeliest to fill out the middle of the rotation, with Lewis Thorpe and Griffin Jax also competing for an opportunity. That’s not a unit to set your hair on fire, but it’s getting closer.

The Twins, of course, not only get the most established arm in the deal, but they’re also getting Peguero, a 24-year-old reliever out of the Dominican Republic who finished last season in High-A. Peguero isn’t close to the prospect that Petty is, but he’s a flyer nonetheless who at least has a chance of becoming a late-inning bullpen arm. Peguero posted a 4.96 ERA over 32 2/3 innings last year, striking out 36 batters in 32 2/3 innings, picking up six saves.

Taking the aerial view, the AL Central continues to get more competitive. The Tigers and Twins have both made strides to challenge the White Sox, who had a relatively clear path to a division title in 2021. Whether this will be enough to get the Twins back to their 2019-20 level remains to be seen.

On the other side, the Reds step further away from their short-lived identity as a free-spending all-out contender for the NL Central crown. The Reds spent aggressively to end their playoff drought prior to the 2020 season, and they succeeded in that measure, making the expanded playoffs as a 31-29 wild card team. They were shut out in their two playoff games, however. They actually improved by winning percentage in 2021, finishing the year with 83 wins, but out of the playoff money.

It’s tough to imagine the 2022 Reds doing even that well after subtracting Gray and Wade Miley from the rotation. Miley, of course, they gave away for nothing, letting division rival Chicago claim him off waivers. Miley may be a 35-year-old coming off a career year, but it still seems relatively short-sighted to let go of a starter who just posted a 5.9 rWAR season without netting even a lottery pick in return.

For Gray, at least, the Reds aren’t walking away empty-handed. Petty is a live-armed righty who can hit triple digits on the radar gun. As the Twins’ top draft pick in the 2021 draft, he comes with plenty of upside, but he’s also just a month out from turning 19. His future, therefore, comes with a wide range of potential outcomes. If nothing else, the Reds accomplished the goal of cutting money from their payroll while adding to the farm system.

Petty was the 7th-ranked prospect in the Twins’ system, per Baseball America, which marks both his fastball and slider as potential 70-grade offerings. He was starting games for the Twins and would continue to do so in 2022, but they saw Petty’s most likely future to be that of a “back-end reliever,” per The Athletic’s Dan Hayes (via Twitter). BA, similarly, writes that “Petty’s upside is significant, but his specific player demographic is inherently risky and he’ll need plenty of time to develop.”

The variability built into Petty’s future might make this trade a tough pill to swallow for Reds’ fans. In the short term, it’s fair to wonder if this deal drops the Reds behind even the Cubs in the overall hierarchy of the NL Central. They are firmly behind the Cardinals and Brewers, and still firmly ahead of the Pirates.

The coming weeks will tell a lot about how the Reds view this deal. If they are entering a full-blown rebuild, rumors about the availability of Luis Castillo and Tyler Mahle will continue to swirl. If, however, the Reds view this deal as a calculated re-balancing of the books – in the vein of how leadership pitched the Raisel Iglesias trade last winter – the Reds might still have enough talent leftover in the rotation to hang around the NL Central race.

At this point, however, they will be relying on a relatively unproven collection of arms after Castillo and Mahle. It’s hard to see where the rotation can build on last year’s success without Gray and Miley unless Hunter Greene quickly emerges as a frontline arm. Vladimir Gutierrez held his own last year, but he’ll need to take another step forward to be anything more than a back of the rotation arm.

There is time left this offseason for the Reds to shift the narrative, but for the time being, this move will further the perception of the Reds as a cost-conscious also-ran more concerned with lowering payroll than truly competing. Critics will lump this deal in with the Iglesias and Tucker Barnhart trades as evidence of their penny-pinching. The Barnhart deal is defensible because of the presence of Tyler Stephenson, but the Iglesias deal ended up hurting the club more than they anticipated in 2021. If the rotation falls off as many expect it will, the Reds will have a hard time selling this move as an example of roster savvy.