The Brewers’ rotation has been its primary strength for the past several seasons. Entering the year the club looked like the favorite in the NL Central (or at least a co-favorite) on the strength of the three-headed monster of Brandon Woodruff, Freddy Peralta and 2021 National League Cy Young winner Corbin Burnes. Brewers starters have indeed been excellent both in the eyes of traditional and newer metrics, ranking fifth in the Majors with a collective 3.36 ERA, fourth with a 3.43 FIP and third with a 3.44 SIERA. 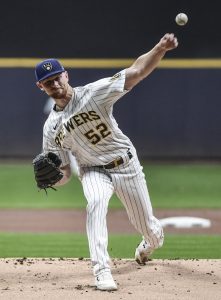 The route the Brewers have taken to get there, however, isn’t the one any would’ve forecast heading into the season. Burnes has been predictably excellent, working to a 2.50 ERA on the back of a dominant K-BB% and thus far making a strong bid for a repeat win in the Cy Young balloting. Woodruff, however, is struggling through his worst full season as a starter thanks to an alarming spike in home-run rate, and he recently hit the IL with a high ankle sprain. Peralta, meanwhile, pitched just 38 2/3 innings of 4.42 ERA ball before a lat strain sent him to the injured list. He’s not expected back anytime soon.

So, how have the Brewers continued on as one of the game’s best starting staffs? They’ve received solid if unspectacular work from fifth starter Adrian Houser and some intriguing work from rookie Aaron Ashby, but the biggest driving factor that’s allowed them to weather the Woodruff struggles and Peralta injury has been Eric Lauer’s transformation from back-of-the-rotation arm to what looks like the next great Brewers starter.

Acquired from the Padres alongside Luis Urias in a deal that sent outfielder Trent Grisham and righty Zach Davies to San Diego, Lauer was seen as a back-of-the-rotation option for the Brewers at the time of the swap. That’s understandable, as from 2018-19, he’d been just that with the Padres. Between those two seasons, Lauer tallied 261 2/3 innings of 4.40 ERA ball with a below-average strikeout rate (20.6%), a solid walk rate (8.4%) and below-average ground-ball tendencies (38.9%). Generally speaking, he fit the soft-tossing-lefty mold with which most baseball fans are familiar: strike-thrower who doesn’t overpower opponents but has good command of the zone and keeps his team in the game more often than not.

As recently as the 2020-21 offseason, the trade to acquire Lauer and Urias looked quite lopsided in San Diego’s favor. Lauer tossed just 11 innings for the Brewers in 2020, while Urias provided no real offensive value through 120 plate appearances that season. Grisham, meanwhile, was excellent while playing 59 of 60 games for the Padres that summer, and Davies had the best year of his career by a wide margin (which helped the Padres subsequently include him in the trade to acquire Yu Darvish from the Cubs). Recent play from Urias and especially Lauer has flipped the narrative, though.

Lauer opened the 2021 season with the Brewers’ Triple-A club and spent the first month of the year there before being recalled to the Majors on April 29. Over his first nine appearances (seven starts, two from the bullpen), he posted a nondescript 4.50 ERA/5.08 FIP and garnered little attention. At that point, few would’ve pegged Lauer as a critical cog to the Brewers’ immediate rotation plans.

On July 3 of last season, however, something changed. Lauer threw a slider. It wasn’t the first of his career, but it was his first of the season. He wound up throwing the pitch just under 20% of the time that day, taking his retooled breaking ball for a test drive against a hapless Pirates lineup with good success. Lauer has featured the pitch regularly since, and it’s difficult to overstate just how important it has been to his arsenal.

Since re-debuting the pitch on July 3 last season, FanGraphs ranks Lauer sixth among all Major League starting pitchers in slider runs above average. His slider trails only Dylan Cease, Shohei Ohtani, Max Scherzer, Tarik Skubal and, ever-so-slightly, Brad Keller. That’s a bit misleading, though, as all of those pitchers other than Scherzer throw their slider more often than Lauer. Keller has thrown his slider at a 38.7% clip in that time, while Cease has used his exactly a third of the time. Ohtani is at 28.8% and Skubal at 26.8%. Lauer’s 19.9% usage rate from 2021-22 comes in at exactly half that of Keller. In other words, on a per-pitch basis, Lauer’s slider has been substantially move valuable than all of Cease, Ohtani, Skubal and Keller.

In fact, when shifting to look at slider value per 100 pitches thrown, Scherzer is the only starter in baseball (min. 50 innings) whose slider has generated more value. (Notably, had the beginning of Lauer’s slider usage not coincided almost perfectly with Jacob deGrom’s 2021 season-ending injury, he’d have ranked above Lauer as well, given that deGrom unsurprisingly had the best per-pitch slider in MLB last year.)

Lauer wound up throwing 224 sliders from July 3 onward last season, and in the 73 plate appearances that culminated with that pitch, his opponents batted just .123/.219/.215. He’s thrown 201 sliders this season, finished off 61 plate appearances with the pitch, and yielded just a .140/.180/.193 output to opponents. This season, Statcast ranks Lauer sixth among big league pitchers (min. 50 PAs) with a .221 expected wOBA against his slider. Given the pitch’s success, it’s little surprise that Lauer is throwing it at a career-high 21.9% clip so far in 2022, and you could argue he ought to feature it even more heavily.

All told, since Lauer reincorporated the slider into his arsenal, he’s made 23 starts and pitched to a 2.40 ERA with a 25.2% strikeout rate and a 7.9% walk rate. He’s had some good fortune, evidenced by a .247 average on balls in play and an 83.6% strand rate, but even accounting for some likely regression in those areas, Lauer looks like a completely different pitcher. That’s especially true because the addition of a slider doesn’t appear to be the only meaningful change that’s led to his breakout.

Entering the 2022 season, Lauer had averaged 91.9 mph on his four-seam fastball. He saw a slight uptick from 91.7 mph (2018-20) to 92.5 mph in 2021, however, and he’s sitting at a career-high 93.7 mph so far in 2022. The left-hander told Curt Hogg of the Milwaukee Journal-Sentinel near the end of Spring Training (where he’d also shown a noticeable jump in velocity readings) that his strong finish in 2021 allowed him to shift his offseason focus from searching for flaws in his delivery and refining his mechanics to building strength. Said Lauer at the time:

“It was more a focus on strength training and finally getting used to my body being synched up like it is now. I spent a lot of time this offseason focusing on upper body movement and strength so I think we’re finally seeing everything line up.”

Lauer’s fastball hasn’t morphed into a dominant offering with the newfound velocity, but it’s performed much better — as one would expect upon jumping nearly two miles per hour in a two-year span. The 2020-21 version of Lauer’s heater was a decidedly below-average offering, according to run values from both FanGraphs and Statcast. Both now rate it as a roughly average pitch. Lauer has posted a career-best 12.9% swinging-strike rate (swings-and-misses per total pitches thrown) on his four-seamer in 2022. His 33.3% whiff rate (swings-and-misses per swing) on the four-seamer is up from 26.5% in 2021 and way up from the 21.5% he posted in 2018-19 with San Diego.

Lauer is far from a two-pitch starter, as he’ll also work in a cutter, curveball and more occasional changeup (which also rates excellently on a per-pitch basis). But the improvements he’s made to his four-seamer and especially to his slider have vaulted him from a fairly run-of-the-mill back-end starter to a legitimate weapon who’s helped the Brewers offset downturns in production from Woodruff and Peralta.

Barring an extension, the Brewers control Lauer for two years beyond the current campaign. That timeframe lines up directly with all three of Burnes, Woodruff and Houser. Peralta is signed through 2024, and his contract contains affordable 2025 and 2026 club options for Milwaukee. The aforementioned Ashby, who perhaps merits a deep dive of his own, is controllable all the way through 2027.

Suffice it to say, the long-term outlook for the Brewers’ staff is quite bright. And, if Milwaukee can get Woodruff and Peralta healthy and closer to 2021 form by the season’s final month, their top four starters — paired with Josh Hader and Devin Williams — will again give them the type of formidable staff that can carry a deep postseason run, provided the Brewers’ bats speak louder than they did last October (six total runs in four NLDS games against the Braves).