The Astros are set to bring up two of their most talented young players in the coming days. Both Hunter Brown and Yainer Diaz are reportedly getting their first major league calls. Brown’s promotion is expected to come when active rosters expand from 26 to 28 players on Thursday, while the specific timing of Diaz’s call isn’t clear.

It’s a fantastic birthday present for Brown, who turned 24 today. A fifth-round pick out of Wayne State University in 2019, Brown has outperformed that relatively modest draft status. He struggled with his control late in his draft year, and his first full professional season was wiped out by the pandemic. The Detroit native began the 2021 campaign in Double-A and generally overpowered upper level hitters. He fanned 35% of opponents and induced ground-balls at a quality 47.7% clip to earn a midseason bump to Triple-A Sugar Land. 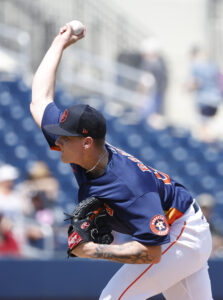 Brown returned to the Space Cowboys to open the 2022 campaign. He’s spent the whole year there, working 106 innings over 23 outings (14 starts). He’s posted a 2.55 ERA that is the lowest mark among the 50 Pacific Coast League hurlers with at least 60 frames. Brown has punched out an impressive 31.5% of batters faced and racked up grounders at a huge 54.2% clip. His 10.6% walk rate is a couple points higher than average, but the combination of strikeouts and grounders hints at the elite stuff he brandishes.

Baseball America recently placed Brown as the sport’s #40 overall minor league talent. BA credits the right-hander with a plus-plus fastball (a 70 on the scouting scale) that sits in the mid-90s and can reach 99 MPH. The outlet praises his plus low-80s curveball and suggests both his slider and changeup could be average MLB offerings. With that kind of arsenal, it’s little surprise Brown has racked up strikeouts in the minors, but evaluators raise questions about his strike-throwing consistency. Whether he’ll have good enough command to stick in an MLB rotation long-term remains to be seen, but it seems likelier the club will break him into the majors as a possible relief weapon for the stretch run.

Houston has a bit of uncertainty in the starting staff at the moment. Luis Garcia has struggled of late, while Justin Verlander is set to undergo an MRI after leaving yesterday’s start with calf discomfort. Even if Verlander requires an injured list stint — which hasn’t yet been determined — the club could work Cristian Javier back into a rotation with Framber Valdez, José Urquidy, Lance McCullers Jr. and Garcia. Brown’s ability to work with high-octane stuff for multiple innings could make him a key bullpen piece for manager Dusty Baker, and September could serve as an audition for a spot on the club’s postseason rosters.

Brown’s promotion is the headlining news for Houston, but Diaz’s call-up also marks a noteworthy transaction. A right-handed hitting catcher, Diaz was acquired from Cleveland in last summer’s deadline trade that sent Myles Straw for Phil Maton. Not generally regarded as a huge piece of the deal at the time, the native of the Dominican Republic played out the 2021 campaign in High-A. Despite a massive showing at the plate, he was left off the 40-man roster last winter and would’ve been available to other clubs had the Rule 5 draft not been canceled due to the lockout.

Remarkably, Diaz has gone from being left unprotected to one of the organization’s top prospects in a matter of months. BA placed him as the organization’s #2 farmhand on their midseason re-ranking of the system, while Eric Longenhagen of FanGraphs slotted him third among Houston’s minor leaguers last month. Both outlets praise his offensive upside, noting that he’s primarily a bat-first catcher. That’s been fully on display during what has been a breakout season in the upper levels.

Diaz began the season in Double-A Corpus Christi. He hit .316/.367/.504 over 267 plate appearances, earning a bump to Sugar Land in late June. The 23-year-old has continued to mash, posting a .294/.342/.587 showing with 16 longballs in 219 trips to the dish. Diaz has only struck out in 16.3% of his plate appearances while posting a cumulative .306/.356/.542 line to earn his first crack at big league pitching. With Martín Maldonado and Christian Vázquez on hand, Baker doesn’t figure to pencil Diaz in behind the dish very often. He’s gotten some looks at first base and very briefly in the corner outfield this season, and he’ll add a bench bat with the ability to catch or work in around the corners as needed.

Each of Brown and Diaz would’ve been eligible for the Rule 5 this winter if not added to the 40-man roster. They were thus locks to be put on the roster at the end of the year at the latest, but Houston will take an early look at two of their top young players to see if they can potentially contribute to this year’s playoff team. Houston’s 40-man roster is full, so they’ll need to create a pair of vacancies there even with the upcoming expansion of the active roster.

Brian McTaggart of MLB.com reported Brown was being promoted. Mark Berman of Fox 26 was first to report Diaz’s promotion.