Aug. 19: The White Sox have officially announced the signing of Andrus, with Sosa getting optioned to make room on the active roster. A space on the 40-man was created by yesterday’s outright of Yoan Aybar.

Aug. 18: The White Sox are in agreement on a contract with free-agent shortstop Elvis Andrus, reports Jeff Passan of ESPN (Twitter link). He’s expected to join their Major League squad in Cleveland tomorrow. The New York Post’s Jon Heyman reported late last night that the Sox were in talks with Andrus, who was released by the Athletics yesterday. 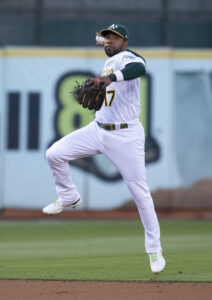 The 33-year-old Andrus (34 next week) is a natural fit for a White Sox club that will be without Tim Anderson for the next three to five weeks as he continues rehabbing a torn ligament in his left hand. Andrus isn’t a premier defender at this stage of his career but is a more natural fit at short than young Lenyn Sosa, who’s been handling the position in place of Anderson recently and has managed just a .118/.143/.235 slash in an admittedly small sample of 35 plate appearances. Andrus’ .237/.301/.378 line isn’t a major improvement but is only narrowly shy of the league-average hitter in 2022.

That’s a far cry from Andrus’ .297/.337/.471 peak in 2017, when he also smashed 20 homers and swiped 25 bags to go along with quality defensive contributions at shortstop. Plugging a veteran shortstop with only slightly below-league-average offense into the lineup wasn’t something the Sox wouldn’t have been able to do just a few days ago, however, so they’re surely quite pleased to be able to add Andrus to the fold.

Defensive Runs Saved pegs Andrus’ glovework at a dismal -6 runs this season, but Ultimate Zone Rating (2.4) and Outs Above Average (zero/average) are more bullish. Even if the defense is now slightly sub-par, Sosa is considered by scouting reports a second baseman who’s ill-equipped to handle shortstop, and the early returns (-2 DRS, -2 OAA in just 41 innings) do nothing to suggest otherwise. Andrus ought to be a steadier option at the position.

Prior to his release, Andrus was playing out the final season of an eight-year, $120MM contract originally signed with the Rangers. The White Sox will only owe him the prorated league minimum for the remainder of the season, with the A’s still on the hook for the remainder of Andrus’ $14MM salary. That previous contract included a vesting $15MM player option upon Andrus reaching 550 plate appearances — he’s currently at 386 — but that’s a moot point now that he’s been released from his prior contract and signed a new one with Chicago. He’ll be a free agent at the end of the season.

It’s been a frustrating season at Guaranteed Rate Field, where the Sox have endured lengthy absences from key players like Lance Lynn, Eloy Jimenez, Yasmani Grandal and now Anderson (to say nothing of shorter IL stints for Luis Robert, Lucas Giolito and others). Things haven’t gone as the front office envisioned when putting together this enviable young core, but the Sox have played better ball of late and, despite some early-season doldrums, are only two games behind the division-leading Guardians and one game back of the second-place Twins. The American League Central should be the tightest three-team race in Major League Baseball down the stretch, so even if Andrus proves a mere incremental upgrade, that marginal improvement could play a pivotal role.