The Mets will promote catching prospect Francisco Álvarez in advance of the team’s pivotal weekend series against the Braves, reports Daniel Álvarez Montes of El ExtraBase (Twitter link). The 20-year-old is one of the sport’s best minor league talents, checking in sixth on Baseball America’s most recent Top 100 prospects list.

It’ll be the first major league call for Álvarez, who entered the professional ranks as an amateur signee out of Venezuela. One of the better prospects in the 2018-19 international signing period, the 5’10” backstop has only raised his stock in pro ball. He hit very well in rookie ball during his first minor league season, but he lost a year of game action with the cancelation of the minors in 2020. Álvarez opened the ’21 campaign in Low-A but quickly proved himself far too advanced for the level, and he spent most of the year in High-A.

Álvarez hit .247/.351/.538 with 22 home runs in 84 games at that level, astonishing production for a 19-year-0ld catcher. It vaulted him near the top of prospect lists entering this season, with Álvarez cracking the preseason top 15 at Baseball America, The Athletic, ESPN and FanGraphs. He opened the year at Double-A Binghamton and connected on another 18 round-trippers in 67 games. His overall .277/.368/.553 line across 296 plate appearances earned him a bump to Triple-A Syracuse in early July. 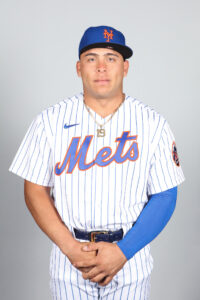 The minors’ top level has given Álvarez his toughest challenge to date, but he’s still generally held his own. Over 199 plate appearances there, he carries a .234/.382/.443 slash with another nine homers. He’s striking out at a career-worst 26.1% clip, contributing to the mediocre batting average, but the rest of his profile has remained strong. Álvarez has walked in a stellar 17.1% of his trips to the plate there, and he’s collected six doubles in addition to the longballs.

Between the two upper levels, Álvarez owns a .260/.374/.511 line with 27 homers and 22 doubles over 495 plate appearances this season. That excellent showing has been enough to convince the Mets front office he can hold his own against big league arms, even at his age. Installing him into a pennant race and directly in advance of the Mets’ biggest regular season series of the year is a strong show of faith, but Álvarez has performed well at every rung on the ladder thus far.

Joel Sherman of the New York Post tweets that the club is likely to break him as a right-handed option at designated hitter. The Mets acquired Darin Ruf from the Giants at the trade deadline in hopes he could fill that role, but that acquisition hasn’t yet panned out. Ruf has a putrid .152/.216/.197 line in 29 games as a Met. He hit a serviceable .216/.328/.373 in 314 plate appearances before the trade, but his struggles since landing in Queens have led to some questions about how manager Buck Showalter will use the DH role. Fellow deadline acquisition Daniel Vogelbach has excelled since coming over from the Pirates and will continue to pick up the playing time against right-handed pitching. Álvarez gives Showalter an alternative to the struggling Ruf for at-bats against left-handers.

It doesn’t seem likely he’ll step directly in as the primary catcher, however. The Mets have veteran James McCann as the starter, with Tomás Nido backing him up. McCann is hitting only .190/.256/.264 in 180 plate appearances, his second straight down year offensively. The veteran has rated as a slightly above-average defender, and he’s drawn strong reviews for his work with the pitching staff. Sending Álvarez behind the plate for the final few games of the season is more than the front office and coaching staff appears to be comfortable with, particularly given McCann’s longstanding familiarity with the staff.

Scouting reports on Álvarez have long suggested he’s more of a bat-first catcher. That’s largely a testament to his offensive potential, but evaluators have expressed some concern about his defense. BA’s scouting report notes that he’s had some inconsistency as a pitch framer and ball blocker. The outlet also suggests that Álvarez’s plus raw arm strength can play down because of some flaws in his throwing mechanics.

There’s general optimism that Álvarez can eventually iron out those concerns and become at least a competent defender. That’s more of a long-term question, though. The immediate pressing issue for the Mets is whether he can make an impact offensively. New York enters the weekend set holding a one-game advantage over Atlanta. New York would also hold the tiebreaker over the Braves if they can take even one of the three contests, so they’d head into next week at the top of the division unless they get swept. Securing their first NL East title since 2015 would come with a corresponding first-round bye, making these final six contests crucial.

Álvarez’s promotion for such important regular season games raises the possibility he’ll also crack the postseason roster. Only players on a team’s 40-man roster by September 1 are automatically eligible to partake in the playoffs. However, players in an organization but not on the 40-man by September 1 can be added to a playoff roster in place of someone on the injured list via petition to the commissioner’s office. That situation is fairly common every postseason, so the Mets shouldn’t have much issue getting Álvarez onto the playoff roster if they desire.

New York will have to add him to their 40-man roster before tomorrow evening’s game. Their roster is currently full, so they’ll need to make a corresponding transaction. He’d have been added to the 40-man after the season anyhow to keep him from being taken in the Rule 5 draft, so there’s little harm in bringing him up a few weeks early. Álvarez will collect his first few days of major league service but won’t be eligible for free agency until after the 2028 season at the earliest. His fastest path to arbitration-eligibility is after the 2025 campaign, and it’s certainly possible he’ll spend more time in the minors polishing up his defense and at least delaying his free agency trajectory.

In the meantime, Mets fans will get their first glimpse at a player they hope to be a key piece of the franchise’s future. McCann is under contract for two more seasons, due $12.15MM annually through 2024. It stands to reason Álvarez will have an opportunity to supplant him on the depth chart at some point next year. For now, he’ll get his feet in the majors as a bat-first option for the stretch run — with some postseason action perhaps on the horizon.