The Rangers have hired Bruce Bochy as the club’s next manager, announcing that Bochy has signed a three-year contract.

There was increased speculation in recent days linking Bochy to the job, especially when Rangers GM Chris Young (who played under Bochy on the 2006 Padres) visited the veteran manager at his home in Nashville, rather than a formal interview.  Interim Rangers manager Tony Beasley was the only other candidate known to receive an interview, further adding to the idea that the team had narrowed its focus towards bringing Bochy back to the dugout after three years away from the game. 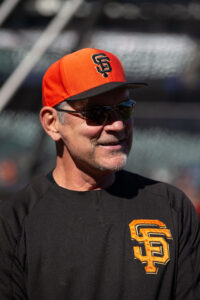 In the team’s official press release, Bochy said he is “incredibly excited to be joining the Texas Rangers.  Over the last several days, I’ve had extensive conversations with Chris Young and other individuals in the organization, and I had the chance to meet with [co-owner] Ray Davis.  Their vision and commitment to putting together a club that can contend and win year in and year out is impressive, and I became convinced I wanted to be a part of that.  If I was going to return to managing, it had to be the right situation.  I strongly believe that to be the case with the Rangers, and I can’t wait to get started.”

Bochy brings 25 years of experience as a Major League skipper, managing the Padres from 1995-2006 and then the Giants from 2007-2019.  During his long career, the 67-year-old Bochy has overseen rebuilding clubs, contenders, and teams that took dips in performance and then returned to contention — there have been enough ebbs and flows that Bochy actually has a career losing record, at 2003-2029.

However, Bochy’s resume also includes some major successes.  The Giants won three World Series titles in 2010, 2012, and 2014 under Bochy’s leadership, as the “Even Year” mini-dynasty brought the organization back to championship glory for the first time since 1954.  (Ironically, the 2010 Giants defeated the Rangers in the Series.)  Bochy also managed another NL pennant winner in the 1998 Padres, which marked the last time that San Diego reached the World Series.

The hire represents a change in direction for the Rangers, as the club tended to hire first-time managers when Jon Daniels was in charge of baseball operations.  (Interim manager Don Wakamatsu ran the team for 10 games in 2018, and was the only one of the last six Texas managers to have any previous MLB experience as a skipper.)  Of course, Daniels was himself fired in August, shortly after ex-manager Chris Woodward was also let go.

Daniels’ firing reportedly even caught Young by surprise, as Young suddenly found himself in charge of an organization that is eager to start winning.  Texas spent big last winter in signing Corey Seager, Marcus Semien, and Jon Gray, and while the team itself felt 2023 might be a more realistic target date for a return to contention, the 2022 club didn’t show much progress in posting a 68-94 record.  This clearly wasn’t good enough for Davis and the Rangers’ ownership group, who didn’t even wait until the end of the season before overhauling the front office.

With Texas sitting at six consecutive losing seasons, there is certainly pressure on Young and Bochy to start delivering some better results in 2023.  The Rangers are again expected to be aggressive this winter, whether that manifests itself as more splashy free agent signings, or trades for proven veterans.

The Royals, White Sox, and Marlins are now the only teams looking to fill managerial vacancies.  In addition to Bochy’s hiring, the Blue Jays (John Schneider), Angels (Phil Nevin), and Phillies (Rob Thomson) all officially signed their interim skippers from 2022 for the full-time positions.