The Royals’ organizational shake-up continues. Shortly after wrapping up a 69-93 season, Kansas City announced that manager Mike Matheny and pitching coach Cal Eldred will not return in 2023. The Royals had exercised a 2023 club option on Matheny’s services in Spring Training, but he’ll be relieved of his duties a season early.

The news comes a few weeks after the Royals made a change atop the front office. President of baseball operations Dayton Moore was dismissed in late September, with general manager J.J. Picollo tasked to lead baseball operations. Picollo’s first major decision is to make a leadership change in the clubhouse, and the Royals will now turn their attention towards finding a new skipper.

Matheny’s dismissal closes the books on his three-year managerial tenure. Originally brought to the K.C. organization over the 2018-19 offseason as a special assistant, Matheny was almost immediately rumored as a likely successor to then-manager Ned Yost. When Yost stepped aside at the end of the 2019 season, the Royals indeed tabbed Matheny to return to the top of the dugout steps. The former big league catcher had spent six-plus years managing the Cardinals between 2012-18, and he obviously impressed the Royals front office during his season as a special assistant. 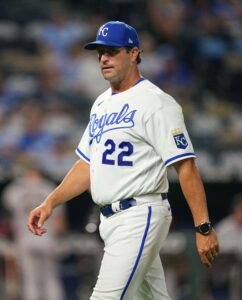 It wasn’t a particularly imposing roster, with Matheny taking over as the team was firmly amidst a rebuild. Kansas City had lost over 100 games in each of the preceding two years, so it wasn’t especially surprising they stumbled to a 26-34 mark during the abbreviated 2020 campaign. The following offseason, the Royals added Carlos Santana, Andrew Benintendi and Mike Minor in an effort to be more competitive. They were, to some extent, finishing with a 74-88 record that came with their highest win percentage (45.7%) since 2017.

Still, the improvements weren’t enough to make the Royals full-fledged contenders. After a 15-7 showing in April, they finished .500 or below in every ensuing month. Kansas City was surprisingly quiet last winter. The Royals reunited with Zack Greinke on a $13MM contract and shipped out the underperforming Minor for reliever Amir Garrett. Otherwise, Kansas City was counting on internal improvements paired with the fruits of a burgeoning farm system to get back above .500 for the first time since winning the World Series in 2015.

The Royals carried top prospect Bobby Witt Jr. on the Opening Day roster. Within a couple months, MJ Melendez and Vinnie Pasquantino would join him. All three have gotten off to solid starts, with Witt and Pasquantino looking like above-average regulars from the outset. The team’s overall performance, though, went in the wrong direction. They won nine fewer games than they had in 2021, finishing with the fifth-worst record in the majors. Benintendi and longtime franchise cornerstone Whit Merrifield were traded away midseason.

Among the biggest reasons for the lack of progress was a starting rotation that ranked 26th in the majors with a 4.72 ERA. Of the seven K.C. starters to top 20 innings, five had an ERA of 4.93 or higher. That’s particularly disheartening considering the volume of talented young arms the Royals have seen reach the majors in recent seasons. Kansas City invested plenty of draft capital in bolstering their pitching pipeline, including using four of the top 40 overall selections in 2018 on college arms. Brady Singer, Jackson Kowar, Daniel Lynch and Kris Bubic were all brought in that year, but only Singer has taken the developmental strides the club had envisioned.

After surprisingly beginning the year in the bullpen, Singer was quickly sent to Triple-A to stretch back out as a starter. After reassuming a rotation role in mid-May, the righty emerged as the Royals most productive arm. He made 24 starts and worked to a 3.11 ERA with an above-average 24.2% strikeout rate and a quality 48.5% ground-ball mark. Singer still struggled to turn over lineups three times, but he dominated opponents his first two times through an order. While it may not have been a perfect campaign, Singer’s 2022 season undoubtedly qualified as a success.

Unfortunately for the Royals, none of his peers took a similar step forward. None of Bubic, Lynch or Jon Heasley posted an ERA below 5.00, and all three had well below-average strikeout rates. Carlos Hernández was one of the league’s worst pitchers in a season-opening rotation look and eventually found himself in the bullpen. Kowar has been hit hard during his limited MLB stints over the past two seasons and had a 6.16 ERA through 20 Triple-A starts this year. Grounder specialist Brad Keller has taken a massive step back over the past couple years and could be non-tendered this offseason. It’s to the Royals’ credit that Keller, selected out of the Diamondbacks organization in the 2017-18 Rule 5 draft, ever emerged as a productive starter in the first place. Still, his regression paired with the lack of progress from many of Kansas City’s most promising arms will have to be an area of focus for Picollo and his front office group.

The first move in that arena comes on the coaching staff. In addition to Matheny, the Royals move on from Eldred after five seasons as pitching coach. First hired to join Yost’s staff going into 2018, the former MLB right-hander remained in the role once Matheny took over two years later. Kansas City will now look for a new voice to work with the big league arms, and Andy McCullough of the Athletic reports the organization is likely to follow with changes to its pitching infrastructure in the player development department.

It’ll obviously be a significant winter for the Royals, who now have the American League’s second-longest active postseason drought. The team’s collection of high-upside rookie position players bolsters an increasingly promising lineup. Kansas City could look for upgrades in the corner outfield and at third base, but the bigger area of concern seems likely to be the pitching staff. The Royals will have to go outside the organization to add at least one or two starters (particularly if Greinke doesn’t return in free agency), and they’ll obviously hope for better results from the likes of Lynch and Bubic in 2023 and beyond.

Kansas City becomes the sixth MLB team without a permanent manager in place. The Blue Jays and Phillies have interim skippers in John Schneider and Rob Thomson, respectively. Those teams qualified for the postseason. The Rangers turned to Tony Beasley in an interim capacity after dismissing Chris Woodward, while the White Sox went with Miguel Cairo once Tony La Russa stepped aside due to health concerns. The Marlins, meanwhile, have already announced Don Mattingly won’t return as skipper next season. There’ll be a fair bit of turnover on the managerial front around the league, although the Angels solidified their situation this afternoon by signing Phil Nevin to a one-year deal and removing the interim tag from his title.