Marc Narducci spent 37 years covering all sports for The Philadelphia Inquirer before recently retiring in July. He covered everything from high school sports to the Phillies winning the World Series and the Eagles winning the Super Bowl. A lifelong Southern NJ resident, he remains a freelance writer and broadcaster. Once again, Marc reached out to see if MLB Trade Rumors would be interested in publishing his Hall of Fame ballot.  I am happy to do it and hope it can be an interesting topic of debate for our readers.  Here’s Marc…

Let’s get it out of the way first. 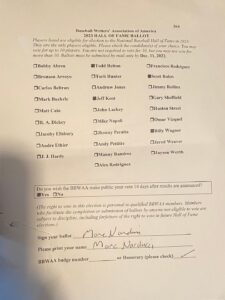 Last season while writing for MLB Trade Rumors about my Hall of Fame ballot, the case was presented that there was no room for the steroid players.

As anybody can see from the comments, my ears were burning as the overwhelming majority of the readers disagreed.

That’s fine. A little discourse is good, and while Barry Bonds, Sammy Sosa and Roger Clemens are off the ballot, and while there are still players on the ballot linked to steroids, the biggest controversy this year centers around Carlos Beltran, albeit, not steroid related.

It was Beltran who MLB said was the mastermind of the Houston Astros cheating scandal in 2017 when they won the World Series. MLB said Houston used an intricate electronic method to steal signs and the only player named as the ringleader was Beltran.

It cost him the job of the New York Mets manager and at least for now, is costing him this vote.

Beltran himself said that the Astros World Series title was “stained” by the scandal.

The fact that he was the mastermind, well, that was cheating the game. He was not a slam dunk candidate before this occurred, but he did have a lot in his favor. For now, he will remain off this ballot.

Should all the Astros be punished?

That will be answered later, but for being the mastermind, Beltran pays the price on this ballot.

And for those who don’t think it was a big deal, both the Yankees and Dodgers, who lost to Houston in seven-game series in the ALCS and World Series respectively, didn’t hold back on their criticism of the Astros.

Now back to the ballot, with the players listed in alphabetical order.

One can talk all they want about the advantage for Colorado Rockies hitters in Coors Field and there is some obvious truth, but it’s also difficult to play on the road after hitting in that altitude.

He was a first baseman who wasn’t known for his power, but he still hit 369 home runs and had 1,406 RBI, while playing all 17 seasons for the Rockies.

He was a five-time All-Star, a four-time Silver Slugger winner and a three-time Gold Glove recipient.

For those who give all the credit to the hitting atmosphere in Coors Field, he has a 133 career OPS+ and a 132 WRC+.

Again, while some suggest batting average is an outdated measure to evaluate players, it should be remembered how difficult it is to hit .300. In 2022, only 11 total players from both leagues hit .300 or better. Helton did it for his career.

This is his fifth season on the ballot and his percentage of votes has increased each year. Last year he received 52% of the vote. It may be too big a jump to make the needed 75% threshold this year, but Helton, a former quarterback with Peyton Manning at Tennessee, appears to one day be headed to Cooperstown.

This is Kent’s 10th and final year on the ballot and it doesn’t appear as if he will come close to getting elected by the writers.

Last season he received his highest vote total, 32.7 percent, so unless he has a miracle surge this year, Kent won’t make it.

Still, being the best power hitting second baseman in history is a main reason he made this ballot.

We know Kent was a below average fielder, but nobody hit more home runs as a second baseman in MLB history.

We acknowledge that Hornsby had 325 fewer at-bats than Kent, but the 50- home run difference (as second basemen) is still jaw dropping, especially for a position that isn’t known for power.
While RBI are downgraded by many in the sabermetrics community, most of the top players in the league each season are among the RBI leaders. Kent is third among second basemen in the Hall of Fame with 1,518 RBI.

His .855 OPS is fifth among HOF second basemen.

Kent was the 2000 MVP, a five-time All-Star, and four-time Silver Slugger recipient.

He was a solid, if not spectacular postseason performer, but qualified for the playoffs seven times with four different teams.

Just a great hitting career, one that was HOF worthy.

Scott Rolen continues to make good progress in his attempt to earn a HOF berth. This is his sixth season on the ballot and last year he received 63.2% of the vote.

He is a player who was as great defensively as he was offensively, maybe even better. There have only been 17 third basemen selected to the HOF, the least among all positions, with the exception of relief pitchers.

Rolen is somebody whose offensive stats weren’t overwhelming, but they were more than good enough to complement his outstanding defense.

First off, he accumulated 70.1 B-WAR, 10th best all-time among third basemen. Of the other nine, eight are in the Hall of Fame and Adrian Beltre is expected to earn induction when he becomes eligible next year.

He was a seven-time All-Star, the 1997 National League Rookie of the Year and an eight-time Gold Glove winner and earned one Silver Slugger award in 2002.

Rolen played in the postseason five different times and won a World Series in 2006 with the St. Louis Cardinals. He hit .421/.476/.737 in the Cardinals’ World Series win in five games over the Detroit Tigers.

The 6-4, 245-pound Rolen had great defensive range, even more impressive for somebody his size. He also had a great arm.

He has improved his percentage of votes each year and Rolen is considered to have a good chance to be voted in by the writers, whether it is this year or possibly next.

Like Kent, Wagner’s time is dwindling. This is his eighth year on the ballot, although he had his best showing last year, earning 51.0% of the vote.

The biggest argument against Wagner is his lack of innings. There are eight relief pitchers in the HOF and all have pitched more than the 903 innings that Wagner threw.

Yet Wagner’s 11.9 strikeouts per nine innings is best in MLB history (minimum of 750 innings pitched).

Wagner finished with a 2.37 ERA and a 187 adjusted ERA and Rivera is the only HOF relief pitcher who bettered those totals.

Wagner was a seven-time all-star and besides the lack of innings, his other blemish is his postseason performance.

Still that is a small sample size even if it is in the most pressurized setting.

Even with the lack of innings and a shaky postseason, Wagner’s dominance in the regular season, puts him on this ballot.