The Rockies added an arm and a local product to their bullpen Tuesday, announcing the signing of free-agent righty Pierce Johnson to a one-year deal. The contract reportedly comes with a $5MM guarantee for Johnson, a client of John Boggs & Associates. He can earn an additional $750K of incentives. It’s a nice guarantee for a pitcher coming off an injury-plagued season, though the Rockies perhaps needed to make an aggressive offer in order to persuade the righty to spend his home games at Coors Field, even if Johnson is a Denver native. 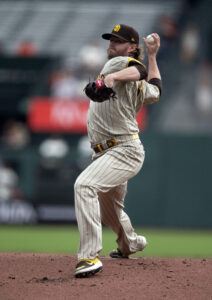 Johnson, 31, once ranked among the sport’s top pitching prospects with the Cubs, who originally drafted him with the No. 43 overall pick in 2012, but he didn’t establish himself in Chicago or in San Francisco after being plucked off waivers by the Giants in 2018. An impressive strikeout rate in Triple-A might’ve helped him garner some attention overseas, however, and Johnson parlayed a dominant one-year stop with the Hanshin Tigers of Japan’s Nippon Professional Baseball in 2019 into a three-year run with the Padres.

In 2020-21, after signing a two-year deal that contained a 2022 club option, Johnson was a reliable member of the San Diego bullpen. Through 78 2/3 frames, he pitched to a 3.09 ERA with an excellent 32.1% strikeout rate — albeit against an 11.1% walk rate that resided well north of the league average.

The Padres picked up their $3MM option on the heels of that strong showing, but the 2022 season brought an unwelcome change of fortune, as Johnson was sidelined for much of the season due to a forearm injury. When healthy enough to pitch, Johnson totaled just 14 1/3 innings of 5.02 ERA ball; his 32.8% strikeout rate and 12.5% walk rate were at least loosely in line with his 2020-21 levels, but Johnson was plagued by a sky-high .382 average on balls in play. Whether because of the forearm injury or something else, Johnson’s fastball — which averaged 96.3 mph in 2020 — sat at a diminished 94.7 mph in 2022.

Rough as the 2022 season was for Johnson, that 3.09 ERA from 2020-21 — paired with a 13.9% swinging-strike rate and elite spin rate on his curveball — surely garnered interest from multiple clubs. He’ll end up pitching for his hometown Rockies, joining a bullpen that lost Carlos Estevez to the Angels and will likely also see veteran Alex Colome sign elsewhere. While Daniel Bard is entrenched as manager Bud Black’s closer, Johnson has an opportunity to take the lead in a largely unsettled setup corps if he can return to form.

Beyond Bard and Johnson, the Colorado bullpen has righty Dinelson Lamet and lefty Brent Suter as veteran options but is otherwise lacking in experience. Lucas Gilbreath has shown some potential in two big league seasons, but outside of injured Tyler Kinley (who’s recovering from Tommy John surgery), the Rockies don’t have another reliever with even a full year of Major League experience on the 40-man roster.

With Johnson now on board, the Rockies’ projected payroll bumps up to nearly $163MM, per Roster Resource. That puts them nearly $20MM past their franchise-record Opening Day payroll of $145MM, set back in 2019. The extent to which Colorado can continue spending, with payroll already at that level, remains unclear, though in addition to another bullpen arm, the Rox could still use help in center field, in the rotation and at catcher.

Thomas Harding of MLB.com first reported the two sides were in agreement on a one-year deal (via Twitter). The New York Post’s Joel Sherman reported the terms of the contract.