The Dodgers figure to come up in the news quite a bit in the coming days as the team’s focus now shifts to the offseason after last night’s loss to the Mets in Game 5 of the NLDS. Earlier today, Jon Heyman already touched down on topics including Don Mattingly’s future, Zack Greinke’s opt-out and qualifying offers for Howie Kendrick and Brett Anderson.

Here’s  more on the Dodgers…

The Dodgers announced that they have acquired right-hander Joel Peralta and lefty Adam Liberatore from the Rays in exchange for right-handers Jose Dominguez and Greg Harris. 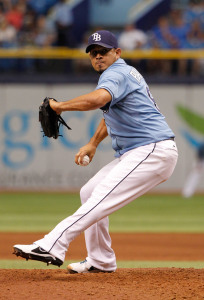 Peralta, 39 in March, has been a workhorse out of the Rays’ bullpen for the past four seasons, averaging 74 appearances and 67 innings per season while posting a 3.58 ERA with 9.8 K/9 and 2.8 BB/9 in 269 1/3 innings. Peralta is an extreme fly-ball pitcher, with a ground-ball rate just north of 31 percent in his career, but the pitcher-friendly Dodger Stadium should mitigate some of that concern.

The veteran Peralta gives the Dodgers a much-needed bullpen upgrade at a very reasonable financial cost. He’s due just $2.5MM in 2015 and has club options for 2016 and 2017 at the same rate — neither of which has a buyout attached. There’s an obvious connection between the Dodgers and Peralta, as former Rays GM Andrew Friedman recently jumped ship to become the president of baseball operations with Los Angeles. Friedman no doubt thinks highly of both Peralta and Liberatore.

Peralta struggled, to some extent, in 2014, posting a 4.41 ERA — his worst mark since an ugly 2009 season with the Rockies. However, he still managed to strike out 10.5 hitters per nine innings and showed the best control he has displayed in recent years, walking just 2.1 batters per nine. Peralta’s typically low BABIP spiked to .307 this past season and he allowed homers at a slightly higher clip than usual; those factors are the likely reasoning behind his increased ERA. However, metrics such as FIP (3.40) and SIERA (2.54) feel that Peralta was much better than his earned run average would indicate.

The 27-year-old Liberatore was lights out in Triple-A this past season, notching a 1.66 ERA with 11.9 K/9 against just 2.1 BB/9 in 65 innings of relief work. He was highly effective against both right- and left-handed hitters, holding each to an OPS south of .500.

Dominguez, 24, has received a brief taste of Major League action in each of the past two seasons with L.A., allowing 10 runs in 14 2/3 innings with a 12-to-6 K/BB ratio. He’s shown a propensity for strikeouts in the minors, however, averaging 10 punchouts per nine innings for his career. Dominguez struggled in the lower levels but has posted a 2.22 ERA in 24 1/3 Double-A innings and a 2.61 ERA in 41 1/1 Triple-A innings. Baseball America ranked him 11th among Dodgers prospects last offseason, calling him a “pure power arm” whose fastball sits 97-100 mph and can touch 102. However, BA noted his erratic command and a 50-game suspension for PED use on his minor league track record in their scouting report. MLB.com ranked him 13th among Dodgers prospects midseason, also praising his fastball but noting that his slider is better known for its velocity than its bite at this time.

The Dodgers selected Harris, 20, in the 17th round of the 2013 draft, and he posted nice strikeout numbers in Class A this season. Harris pitched to a 4.45 ERA as a 19-year-old in the Midwest League, whiffing 92 hitters against 28 walks in 87 innings of work. Fangraphs’ Kiley McDaniel tweets that he’s heard good things about the velocity of both pitchers acquired by the Rays in this deal, with Dominguez having been clocked as high as 103 mph and Harris sitting in the mid 90s as a starter.

The Rays have exercised their $2.5MM team option on right-hander Joel Peralta for the 2015 season, MLBDailyDish.com’s Chris Cotillo reports (Twitter link). Earlier today, CBS Sports’ Jon Heyman reported that the Rays were likely to pick up Peralta’s option and bring the 38-year-old back for his fifth season in Tampa.  Peralta is represented by Mark Gilling.

Peralta would seem to be well worth the $2.5MM price tag, though there was some speculation that the Rays could decline the option given their limited payroll and a 40-man roster crunch.  Tampa Bay also holds club options on Peralta for 2016 and 2017 (each worth $2.5MM) as per the original two-year contract he signed prior to the 2013 season.

The Rays will wait until tomorrow to make their option decision on reliever Joel Peralta, the Tampa Bay Times’ Marc Topkin tweets. They’ll also soon be making other 40-man decisions, since they need to reinstate Matt Moore and Jerry Sands from the 60-day disabled list, and their roster is currently full. Peralta’s option comes at $2.5MM, and if the Rays exercise it, they’ll have options at the same price for 2016 and 2017 as well. Peralta is 38 and is coming off a season in which he posted a 4.41 ERA, and the Rays could decide to let him go to save a bit of money and clear a roster spot for a younger player. In general, though, $2.5MM would seem to be a reasonable price for a reliever who had 10.5 K/9 and 2.1 BB/9 last season. Here’s more from the American League.

If he hangs up his spikes, as he is said to be weighing, Red Sox catcher David Ross should have plenty of avenues for non-playing jobs in the game, tweets Jason Mastrodonato of MassLive.com. A former GM tells Mastrodonato that he considers Ross a close friend and would be more than happy to find a position for him.

Here’s more from Boston and the rest of the AL East:

11:58pm: Rubin was told by a Mets person there's nothing there regarding the team pursuing Pestano.

10:33am: In search of late-inning relief help, the Mets are targeting Indians right-hander Vinnie Pestano, reports Adam Rubin of ESPNNewYork.com. Though it's not clear whether the Mets have made an offer to Cleveland, New York has been pursuing Pestano at the Winter Meetings, says Rubin.

The Mets have also attempted to engage the Rays and Royals about bullpen pieces, but haven't made any progress on either front, according to Rubin. New York inquired about Joel Peralta, but found Tampa Bay's asking price too high. The Rays just re-signed Peralta to a multiyear deal a couple weeks ago.

The Rays announced that they have re-signed reliever Joel Peralta to a two-year contract. The deal guarantees the 36-year-old $6MM and includes a series of club options covering the 2015-17 seasons. Agent Mark Gilling represents the right-hander, who will be welcomed back to Tampa Bay.

“We love Joel’s competitiveness and the impact he has on the younger pitchers in our bullpen,” executive VP of baseball operations Andrew Friedman said in a team statement.

Peralta ranked 38th on MLBTR's list of top 50 free agents. At the end of the season he expressed interest in re-signing with Tampa Bay if possible. Marc Topkin of the Tampa Bay Times first reported the news, adding that the 2015 option was valued at $2.5MM.

12:18pm: The Rays announced that they avoided arbitration with right-handed reliever Joel Peralta, and agreed to terms on a one-year, Major League contract for 2012. Mark Gilling represents Peralta, who had a projected $2MM salary for 2012, according to MLBTR's estimates.

Many players were placed on waivers and were not traded, including John Danks, Gavin Floyd, Paul Konerko, Matt Thornton, Brett Myers, Clint Barmes, and Craig Breslow.  It's safe to assume several of these players were claimed and then pulled back.  Additionally, at least 23 players have cleared waivers and can be traded to any team.