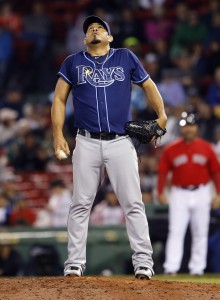 The Cubs have designated right-hander Joel Peralta for assignment in order to clear a spot on the roster for the return of Adam Warren, per multiple reporters out of Chicago, including the Sun-Times’ Gordon Wittenmyer (Twitter link). The team still needs to make a move for the activation of infielder Tommy La Stella, and Wittenmyer tweets that David Ross is being evaluated for concussion symptoms after taking a foul ball off his mask yesterday.

Peralta, 40, inked a minor league deal with the Cubs after being designated for assignment and released by the Mariners earlier this season. He quickly found himself in Chicago’s big league bullpen, though his stay there proved to be brief. Peralta totaled just four innings with the Cubs, and though he posted a 5-to-1 K/BB ratio, he also served up a pair of homers and yielded a total of four earned runs out of manager Joe Maddon’s bullpen. Homers have been problem for Peralta all season long, and the result has been a 5.93 ERA in 27 1/3 innings between Chicago and Seattle.

The Cubs have agreed to a minor league deal with veteran righty Joel Peralta, Ken Rosenthal of FOX Sports tweets. The agreement is pending a physical.

Peralta, 40, was recently cut loose by the Mariners after a rough start to the season. Seattle still owes him the balance of his $1.25MM salary, less whatever he can earn (presumably, at the league minimum) with Chicago or another organization.

Though Peralta has pitched to a 5.40 ERA in his 23 1/3 frames on the year, there is some reason for optimism. He also struck out 10.8 and walked only 2.7 batters per nine with the M’s, and he’s maintained his velocity while hitting the zone and managing contact much as he has in prior years. The trick will be limiting the long ball, which has hurt the flyball-prone reliever thus far in 2016.

Per the report, the Blue Jays and Royals also showed interest before Peralta elected to reunite with manager Joe Maddon. Many of Peralta’s best seasons came with Tampa Bay during his four-year run with the organization.

SATURDAY: Seattle has released Peralta, according to a club announcement.

THURSDAY: The Mariners have designated righty Joel Peralta for assignment, the team announced. Fellow right-hander Cody Martin will take over his spot in the Seattle pen.

Peralta, 40, joined the M’s on a minor league deal over the winter. He is owed $1.25MM, but presumably hasn’t earned much (if any) of the $2.5MM incentive package.

Seattle hasn’t received the reliable production it hoped for out of the veteran. Peralta’s velocity, contact, and zone numbers all look similar to prior seasons. But he’s always allowed a lot of flyballs, and this year more than ever (20.0%) have turned into home runs.

The result is that Peralta owns an ugly 5.40 ERA over 23 1/3 innings, and that mark has been on the rise of late. On the other hand, he’s running out an impressive 10.8 K/9 against 2.7 BB/9, so it won’t be surprising to see him earn another opportunity at some point this season — though that may come with another organization.

As Opening Day approaches, teams will be making tough roster decisions involving their veteran players.  Some of these decisions pertain to Article XX(B) free agents who have their opt-out date on Tuesday, though other players have opt-outs that fall on Sunday or Monday.  We’ll keep track of the players who make the big league roster cut here:

Some news from the AL West…

Angels right-hander Jered Weaver experienced tightness in his neck this morning and underwent an MRI that is being described as precautionary, tweets MLB.com’s Alden Gonzalez. While a fair number of players have undergone such tests and checked out just fine early in spring, there’s been some added concern surrounding Weaver given the fact that his fastball didn’t top 80 mph in his second spring outing, during which he served up three homers and yielded a total of five runs on six hits and a walk without a strikeout in 2 2/3 innings. Pedro Moura of the L.A. Times was among the reporters to speak to Weaver following yesterday’s start, with Weaver telling the media, “I wake up every day hoping this is the day that it’s going to click, and it just hasn’t happened yet.” Weaver voiced confidence that he can retire hitters even with diminished velocity, but after averaging 83-84 mph on his heater last season, the former ace’s velocity figures to be an ongoing point of intrigue. Weaver is earning $20MM in the final season of a five-year, $85MM contract in 2016.

Elsewhere in the AL West…

FEBRUARY 9, 5:21pm: Jon Heyman reports that Peralta’s contract comes with a $1.25MM base salary, should he make the club (Twitter link). That figure can increase based on performance incentives.

1:02pm: The Mariners have signed veteran righty Joel Peralta to a minor league deal, per a club announcement. A client of Mark Gilling, he will receive an invitation to Major League camp.

Peralta will be entering his age-40 season after a subpar campaign with the Dodgers in which he battled through shoulder and neck issues. He ended with a 4.34 ERA over just 29 frames with 7.4 K/9 against 2.5 BB/9. Peralta has never induced many groundballs, which continued last year, and he struggled to prevent the long ball (1.86 HR/9, 14.6% home run per flyball rate).

That marked a significant downturn from his prior years’ efforts. Dating back to a breakout 2010, in which he emerged as a quality pen piece for the Nationals at 34 years of age, Peralta averaged a 3.34 ERA (with an identical 3.34 FIP) and 9.7 K/9 against 2.6 BB/9 for a five-year stretch.

If there’s hope for a return to that lofty standard, it may lie in the fact that Peralta has never been reliant upon velocity and still works with something close to the same average fastball speed that allowed him to succeed previously. By measure of Pitch F/X pitch values, the veteran’s heater and splitter remain quality offerings, with his curveball turning suddenly into a huge negative. If that can be fixed, then perhaps he reverse a sharp drop in his swinging strike rate (from 11.7% to 7.9%, year over year).

A glance at the incredible Brooks Baseball database shows some inconsistency in the breaker. Peralta’s release speed on the hook was much lower than usual to start the year, with the offering losing a bit of vertical movement as he increased his arm action. It is worth noting that Peralta allowed just two earned runs in his final ten frames, including one postseason appearance, while logging a dozen strikeouts without permitting a free pass.

If nothing else, Peralta provides some depth — if not some upside as well — to a re-worked Mariners pen. As ESPN.com’s Jayson Stark notes on Twitter, he joins Steve Cishek, Joaquin Benoit, Justin DeFratus, Evan Scribner, and others in a unit that lost players like Fernando Rodney (free agency), Carson Smith (trade), and Tom Wilhelmsen (trade).

The Dodgers have declined the team’s club options on starter Bronson Arroyo, reliever Joel Peralta, and infielder Chase Utley, the team announced (h/t to J.P. Hoornstra of the Los Angeles News Group, on Twitter). That trio will all hit the open market with the move. It would be hard to call any of the decisions a surprise, as all three veterans had their issues in 2015.

The aging Arroyo missed the entire year with Tommy John surgery, but still changed hands twice. He was moved to the Dodgers as part of a huge trade deadline swap with the Braves, who had previously taken on his salary in order to add prospect Touki Toussaint. The $4.5MM buyout on his $11MM option, then, will remain the responsibility of the Atlanta organization.

Peralta’s deal, which was signed with the Rays when now-Dodgers president of baseball operations Andrew Friedman was in charge there, included three successive $2.5MM options. None include buyout obligations. The first of those was picked up, but the 2016 version proved too costly after Peralta managed only 29 innings of 4.34 ERA pitching on the year. (More worrisome, perhaps, are his fading strikeout numbers and time missed due to a neck injury.)

As for Utley, who was picked up in an August swap, the $2MM buyout on his $15MM vesting option will be paid by the Phillies. Utley’s contract, like Peralta’s, included a trio of options. A mid-season break due to ongoing ankle issues kept Utley shy of the vesting requirement (500 plate appearances), and the 36-year-old never really got going at the plate with either organization. He ended up with a composite .212/.286/.343 batting line — by far his lowest output since he established himself as a regular in 2005.